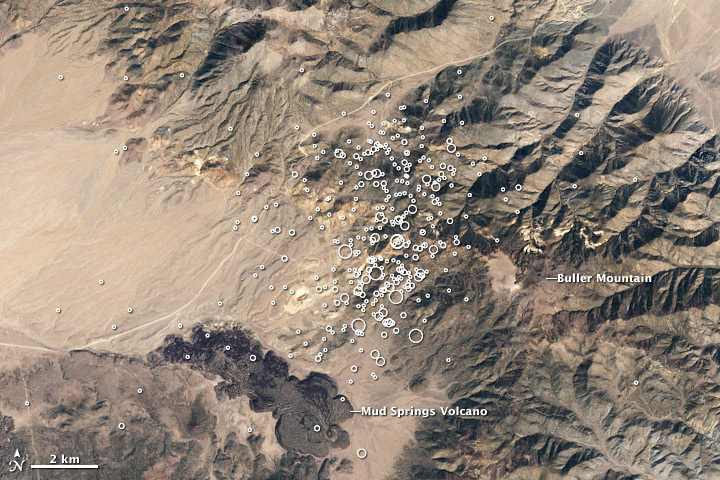 For several weeks in March and April 2011, a swarm of earthquakes has shaken the ground near Hawthorne, Nevada. The small- and medium-sized earthquakes have been concentrated near Buller Mountain, in an area of about 10 square kilometers (4 square miles). Over 400 earthquakes above magnitude 1.0 have occurred since April 10, up to a magnitude of 4.6.

This map shows earthquake locations (white circles) from March 5, 2011, through the early morning of April 27, superimposed on a natural-color satellite image from September 19, 2002. At low elevations, the lightly vegetated land is tan, while the Wassuk Range is covered in dark green forest. Several abandoned mines are visible as bright scars on the landscape, and the lava flows of Mud Springs Volcano are dark gray. The image was acquired by the Enhanced Thematic Mapper Plus (ETM+) aboard Landsat 7.

Although the earthquake swarm has been adjacent to the Aurora-Bodie Volcanic Field, the earthquakes are tectonic in origin, not volcanic. Geologists distinguish between tectonic and volcanic earthquakes by looking at the waveforms recorded by seismographs. High-frequency events with a sharp onset—like a drum beat—are tectonic. Earthquakes that are long lasting and low- or medium-frequency—like a sustained note—are likely to be volcanic.

The Hawthorne earthquake swarm occurred in the Basin and Range geologic province, an area of flat, low elevation valleys situated between linear mountain ranges. The Basin and Range stretches from the Sierra Nevada in the west to central Utah in the east, and the complex topography is caused by the uplift, stretching, and thinning of the North American crust. The stretching crust results in the frequent earthquakes and occasional volcanism in the area.