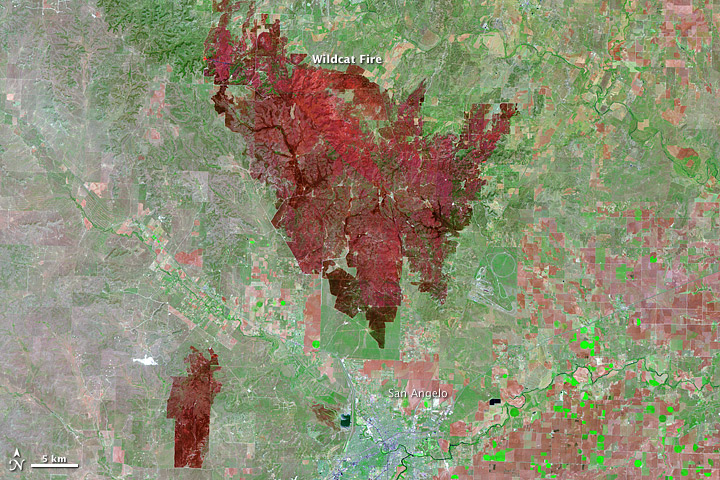 Of the hundreds fires that burned in Texas throughout April 2011, the Wildcat Fire was among the largest. By May 2, the fire had burned 159,308 acres and was 98 percent contained. This image, taken by the Landsat-5 satellite, shows the freshly burned land on April 18. The burned land is dark red in the false-color image, which was made from a combination of visible and infrared light. The bright prink spot on the northeastern edge of the burned area may be a hot spot on the fire front.

According to the Texas Forest Service, the fire was burning in tall grass immediately north of the town of San Angelo. The fire threatened 400 homes, but destroyed just one. The area was designated a federal disaster area just a few days before the image was taken.

A sprawling grid of pale white roads defines this as a semi-populated area. The roads and buildings are much closer together in community of San Angelo, which is silver. Roads cross through the burned area, defining areas lost to the fire. Unburned grassland is green while irrigated, fertilized farmland is bright green. Bare, unburned earth is pink-brown.