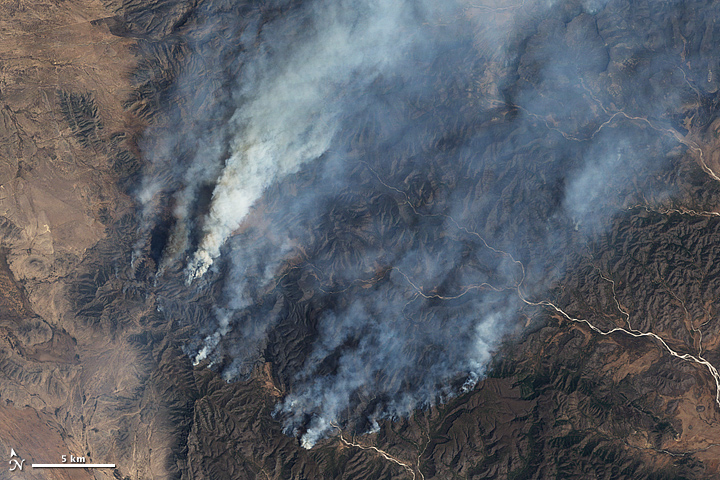 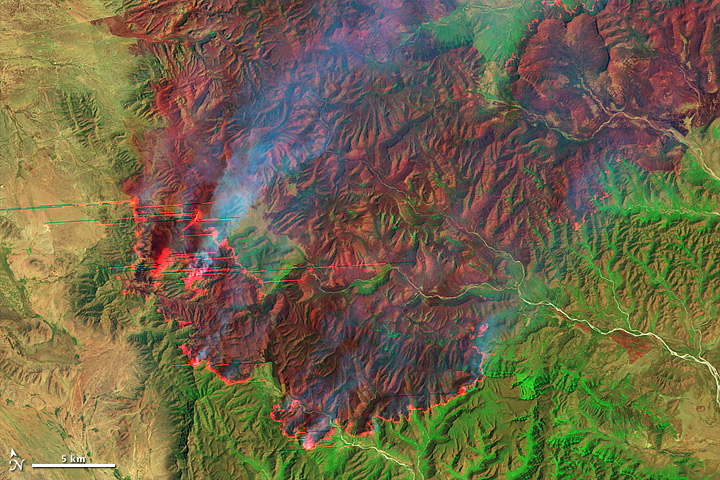 These images, taken by the Landsat-5 satellite on April 9, 2011, illustrate the challenges facing firefighters combating two large wildfires in northern Mexico’s Coahuila state. The fires are burning on steep mountain slopes that are difficult to impossible for ground crews to reach. The top image shows dense plumes of smoke blowing northeast on strong winds. The lower image, which includes both infrared and visible light, provides a view through the smoke to the freshly burned terrain.

The fires, called El Bonito and La Sabina, were caused by lightning strikes in mid-March and had burned 99,000 hectares (245,000 acres or 380 square miles) as of April 11. The fires are among the largest in Mexico’s history, according to news reports. The burned land is brick red in the lower image. Hot areas glow orange in infrared light, revealing the active fire front on the south and west sides of the burned area. (The orange horizontal stripes are satellite sensor artifacts.)

The fires are burning mostly grass and shrub land, ecosystems that are adapted to fire, says the Comisión Nacional Forestal (CONAFOR, Mexico’s National Forest Service). Lack of winter rain and frost left the plants dry and prone to fire. On top of that, the area has not burned for more than 20 years, during which time fuel built up. Thunderstorms and steady strong winds with gusts up to 70 miles per hour completed the formula for a dangerous, fast-moving wildfire.

As of April 11, the fire-prone vegetation, inaccessible terrain, and strong winds had thwarted 900 firefighters working to control the fires, said CONAFOR. On April 11, a Boeing 747 tanker and three helicopters from the United States joined nine helicopters in fighting the fires.

Once the fire is out, the grass and shrub ecosystems should return quickly. In such ecosystems, fire usually destroys the above-ground plants while sparing the roots. This means that the burned area should begin to recover in the next rainy season.