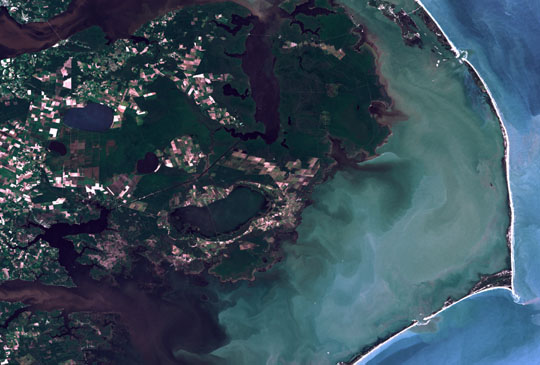 A NASA oceanographer, using spaceborne technologies to study the effects of Hurricane Floyd, has seen indications that there may be significant impacts on the marine food chain along the North Carolina coast due to extensive rainfall in the region.

"Periodically, levels of dissolved oxygen in the water have dropped dramatically as organic matter decomposes, and aquatic life has been threatened in dozens of estuaries and peripheral habitats, commonly referred to as 'dead zones.' The current changes in the area may have lasting repercussions for hundreds of thousands of people," he said.

The image above, from Landsat 7, shows the sediment washed into the ocean from hurricane Floyd's rains.

For more information and images of this event, see the Floyd's Carolina Floods from the Scientific Visualization Studio.