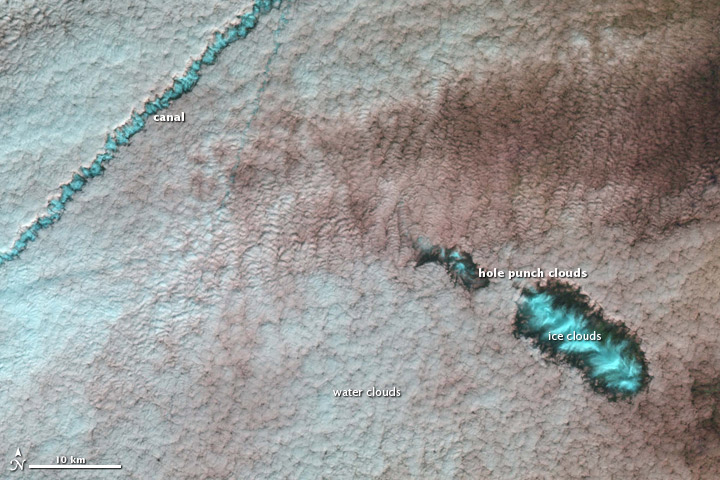 Looking up on a chilly December morning in 2009, residents of rural West Virginia (southwest of Charleston) would have seen a halo of light bursting through the thin bank of clouds that hung overhead. The light was streaming through hole-punch clouds and canals, most likely created by passing airplanes. This image, taken by the Landsat-5 satellite on December 11, 2009, shows the unique conditions in which such holes form.

When airplanes, particularly propeller aircraft, pass through the clouds, they disturb the air. The air expands in the turbulence created by the propellers and wings. As the air expands, it cools, and the supercooled water droplets in the clouds freeze into ice. These ice crystals act as seeds for other water droplets to freeze onto. Over time, the water clouds around the disturbed area disappear and an ice cloud grows.

The clouds created in this manner take two different forms: hole-punch clouds and canals. The hole-punch clouds consist of an ice cloud surrounded by a halo of clear sky where the water in the clouds has frozen into ice and disappeared. Canals resemble contrails. They are long streaks where ice clouds are continuously being formed as the aircraft travels in the altocumulus cloud layer.

The image above was made with both infrared and visible light, in a combination that makes it possible to distinguish between water and ice clouds. The even cloud blanket is pale blue and pink, the warmer tones of water clouds. In the hole-punch clouds, however, we see the iridescent blue signature of ice, surrounded by a halo of clear sky. A similar blue streak from a canal runs across the top left.

The surrounding cloud bank is made up of altocumulus clouds, sitting at an altitude of 2,000 to 7,000 meters (6,600 – 23,000 feet), where temperatures ranged between minus five and minus twenty degrees Celsius, according to radiosonde data taken nearby. Despite the chill, this image reveals that the clouds were made of water, not ice.