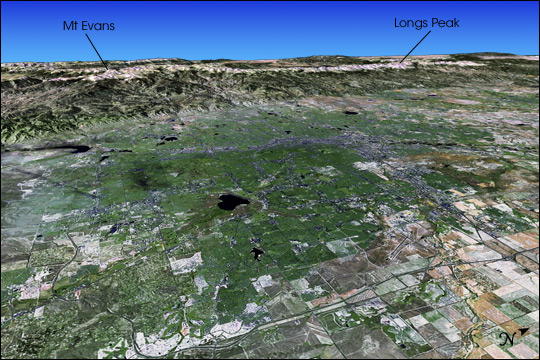 On the high plains at the base of the eastern foothills of the Rocky Mountains, the Mile High City rose up on the hopes of gold miners, who founded the city in 1858 after the discovery of gold in the waters at the confluence of the South Platte River and Cherry Creek. Denver, Colorado, quickly became a hub for the mining towns to the west and the agricultural interests on the plains to the east. Unhindered by any major body of water or topographic feature to the north, south, or east the city has expanded in all directions, even creeping up the foothills to the west of town.

In the image above, the view is toward the west, over the city (foreground) and high into the Rockies (background). The landscape has changed dramatically since the days of the Arapaho and Cheyenne, when buffalo would have grazed over seemingly endless expanses of shortgrass prairie. Reservoirs, such as the Cherry Creek Reservoir to the left of image center, and not regular rainfall are responsible for the green vegetation scattered through the developed areas in the city. In fact, the sun shines about 300 days a year in Denver, and it receives only about 13 inches of precipitation annually.

While the foothills west of Denver have seen their fair share of development, the snowcapped peaks of the Front Range remain protected in large part due to the 1964 Wilderness Act. Immediately west of Denver, Mount Evans rises to 14,264 feet and is crowned by America’s highest paved road. Stretching to the north (right), the Front Range continues into the Vasquez Peak, James Peak, and Indian Peaks Wilderness Areas, before rising to above 14,000 feet again at Longs Peak in Rocky Mountain National Park.

The image above is a visualization created by merging natural-color imagery (Bands 3, 2, and 1) from the Landsat 7 satellite’s Enhanced Thematic Mapper Plus (ETM+) instrument collected on September 20, 2002, with elevation data from the Shuttle Radar Topography Mission (SRTM) that flew on the Space Shuttle Endeavor, which launched in February 2000.

Thanks to Kevin Day for help in describing the image.
Visualization by Earth Observatory.
Landsat data and SRTM data coregistration provided by the Landsat Project Science Office at NASA’s Goddard Space Flight Center.