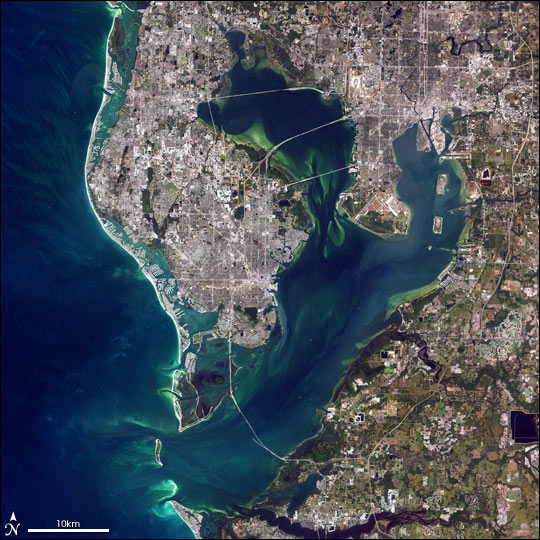 In many low-lying coastal cities around the world, people have pushed development right out to the water’s edge. On most days, such closeness to the water is a pleasure, even a luxury. But when hurricanes and tropical storms approach, it’s a different story. People can evacuate themselves, but they can’t take their homes, airports, or roadways with them. The damage to development by flooding, winds, and storm surges can be severe.

This Landsat satellite image of Tampa Bay on the western coast of Florida, shows just how close people have come to the “ends of the Earth.” A cluster of cities encircles the western and northern portions of the Bay in a mosaic of gray, green and white. The peninsula in the left half of the scene is covered by St. Petersburg (southern portion) and Clearwater (northern portion) and their suburbs, which appear to have merged the entire area into one large city. Across the western arm of the Bay, three causeways connect St. Petersburg and Clearwater to the city of Tampa, which occupies the top right of the image. Development runs right out to the edge of the thin, white strip of sandy beach on the barrier island that follows the Gulf coastline.

Hundreds of thousands of residents in the Tampa Bay area evacuated their homes in the days leading up to the landfall of Hurricane Charley, which forecasters predicted would come ashore at or near Tampa Bay on the afternoon of Friday, August 13, 2004. In addition to lashing winds and pouring rain, people in the low-lying cities were told to expect a storm surge possibly as high as 14 feet, which could easily bring the ocean ashore into beach houses and over roads. Instead, Charley turned right shortly before it made landfall, bringing its Category 4 winds and ten-mile-wide eye over Charlotte Harbor, about 75 miles to the south. Even so, the impacts of such a powerful storm will likely be felt at Tampa Bay and other places up and down Florida’s Gulf Coast.

For images of Hurricane Charley, please visit the Severe Storms section of the Earth Observatory.