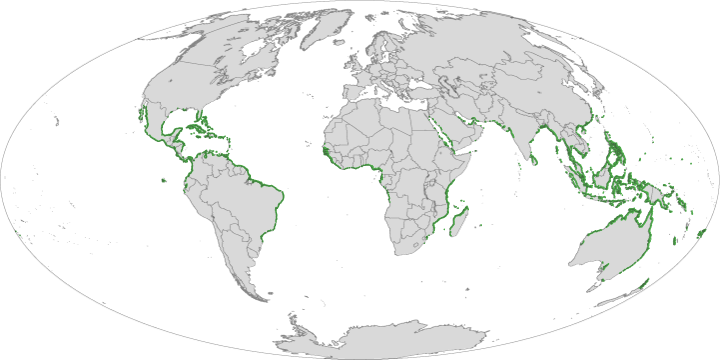 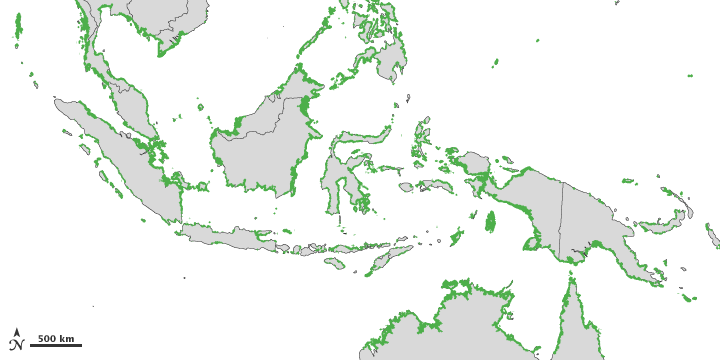 Mangroves are among the most biologically important ecosystems on the planet, and a common feature of tropical and sub-tropical coastlines. But ground-based evidence suggests these vital coastal forests have been strained in many regions because of harvesting for food, fuel, and medicine. Now, scientists have used satellite images to compile the most comprehensive map of mangroves worldwide, which should help in future efforts in monitoring and conservation.

Mangrove forests are typically made up of trees, shrubs, and palms that have adapted to the harsh conditions of high salinity, warm air and water temperatures, extreme tides, muddy, sediment-laden waters, and oxygen-depleted soils. They are fertile nurseries for many marine species, and also serve as a first line of defense against hurricanes and tsunamis by dissipating wave and wind energy.

These maps show the location and relative density of mangroves, which cover an estimated 137,760 square kilometers (53,190 square miles) of Earth’s surface. Such coastal forests can be found in 118 countries and territories, though nearly 75 percent of their area occurs in just 15 countries. They are most often found straddling the equator between 25° North and South latitude. About 42 percent of the world’s mangroves are found in Asia, with 21 percent in Africa, 15 percent in North and Central America, 12 percent in Australia and the islands of Oceania, and 11 percent in South America.

The effort to create the maps was led by Chandra Giri of the U.S. Geological Survey and published recently in the journal Global Ecology and Biogeography. Using digital image classification techniques, the research team compiled and analyzed more than 1,000 scenes from the Landsat series of satellites.

Giri and colleagues found 12.3 percent less area covered by mangroves than previously estimated by the United Nations Food and Agriculture Organization. The current extent of mangroves is probably half of what once existed. Only 6.9 percent of mangrove forests are protected by law.

Indonesia (center of the second map) includes as many as 17,000 islands and nearly a quarter of the world's mangroves. Yet those forests have been cut in half in the past three decades, shrinking from 4.2 million hectares in 1982 to 2 million in 2000. Of the remaining forests, nearly 70 percent are “in critical condition and seriously damaged,” reported Fadel Muhammad, Indonesia’s minister of fisheries and marine affairs.

Nearly a fifth of the coast of Australia is edged by mangroves. Australia has the third largest area of mangroves in the world (after Indonesia and Brazil), and approximately 6.4 percent of the world’s total mangrove area.