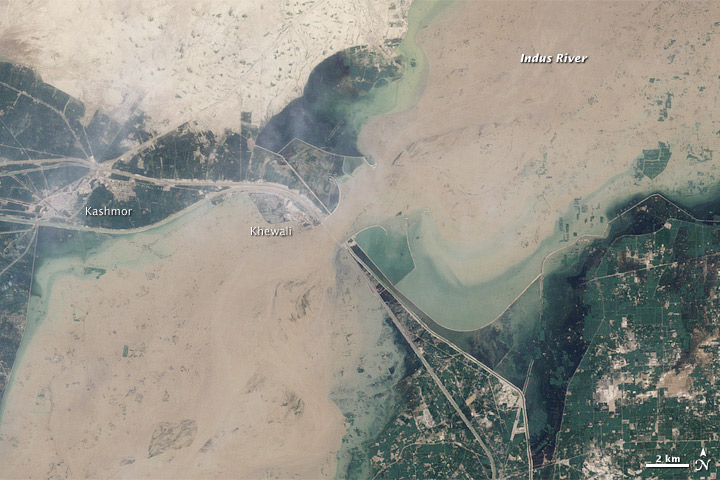 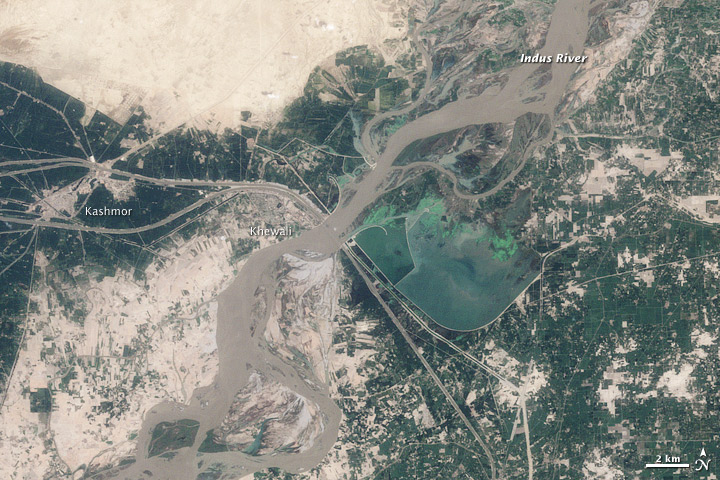 By mid-August, the extreme monsoon floods that had overwhelmed northwestern Pakistan had traveled downstream into southern Pakistan. The top image, acquired by the Landsat 5 satellite on August 12, 2010, shows flooding near Kashmor, Pakistan, just before the second wave of the flood hit. The lower image, provided for context, shows the region on August 9, 2009.

Even before the second wave reached this section of the Indus, floods covered much of the city of Khewali and the surrounding farmland. The flood-widened river is muddy and brown in the top image, and it impinges on the cement-gray town of Khewali.

As if constrained by a belt, the river is cinched near Khewali. The constraint is the Guddu Barrage, a barrier designed to channel irrigation water to farmland in the northern Sindh district. The “C”-shaped barrier that controls the shape of the flood in the top image is itself visible in the lower image. Canals extend away from the barrage on both sides of the river. A road runs along the canal, and it too appears to be flooded. Stream gauges at the Guddu Barrage recorded extremely high levels of water (more than 910,000 cubic feet per second) flowing down the Indus on August 12. The flow rate increased on August 13 as the second wave of flooding reached the barrage.

On August 18, the Pakistan government stated that 15.4 million people had been directly affected by the flood with nearly a million homes damaged or destroyed. The land along the Indus River is prime farmland, and nearly 80 percent of the flood victims are farmers who have lost crops, animals, and equipment. At least 3.2 million hectares of crops had been destroyed as of August 18, reported the United Nations Office for the Coordination of Humanitarian Affairs.

NASA image by Robert Simmon, based on Landsat 5 data from the USGS Global Visualization Viewer. Caption by Holli Riebeek.