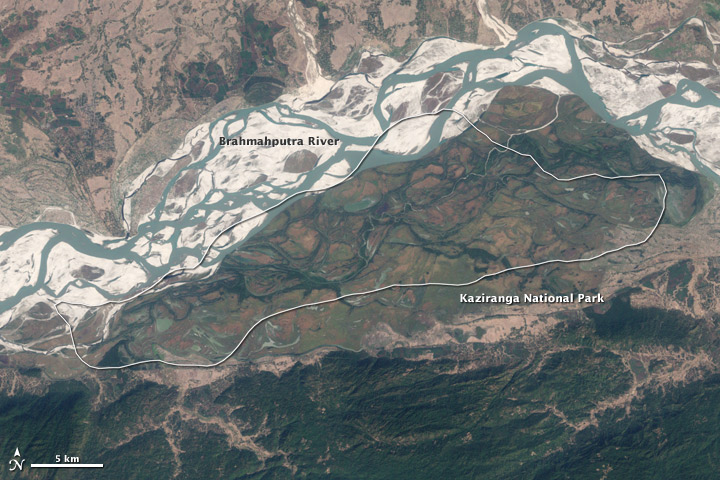 In the state of Assam, in the northeastern corner of India, Kaziranga National Park protects a few hundred square miles of the Brahmaputra River’s natural floodplain. In the fertile soil washed down from the Himalaya Mountains during the yearly floods, lush grasses grow up to 20 feet high, making the park a paradise for grazing animals and their predators.

This natural-color image from the Landsat satellite shows Kaziranga National Park on February 5, 2000. The river flows west through braided channels interspersed with sandy islands. The grassy expanse of the park to the south is dotted with pools of water.

The hilly terrain on both sides of the river plays an important role in making the park a wildlife haven. When snowmelt and summer monsoon rains flood the lowlands, the residentsâ€”which include endangered rhinos, elephants, wild water buffalos, and tigersâ€”migrate from the river corridor to higher ground. Small reserves and sanctuaries protect some of the forested hills south of Kaziranga, but villages and fields are mixed among them, which means that human-wildlife conflicts are inevitable.

NASA image by Robert Simmon, based on Landsat-7 data from the USGS Global Visualization Viewer, and the World Database on Protected Areas. Caption by Rebecca Lindsey.