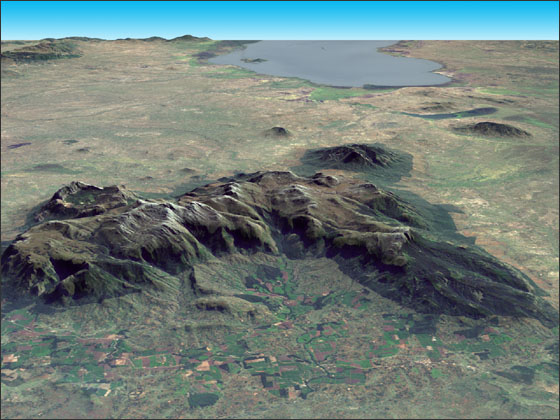 In southern Malawi, Africa near the Mozambique border, Mount Mulanje rises over 9400 feet into the sky. The â€œIsland in the Sky,â€ as locals refer to it, often towers above the mist that is prevalent around its flanks. This botanically rich area was designated as the Mulanje Mountain Biosphere Reserve in 1927. UNESCO’s World Heritage Centre has called the Mulanje reserve, â€œan interesting feature scientifically, educationally, socially.â€

On this Landsat image, the dark green hues of the mature vegetation within the reserve make the boundary of the protected region unmistakable. Lake Chilwa can be seen north of Mount Mulanje.

This perspective image uses a Landsat 7 image acquired on May 26, 2002 coupled with elevation data from the Shuttle Radar Topography Mission (SRTM).