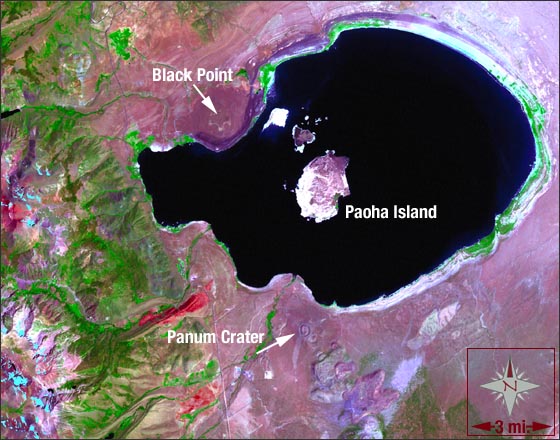 This Landsat 7 image of Mono Lake was acquired on July 27, 2000. This image is a false-color composite made from the mid-infrared, near-infrared, and green spectral channels of the Landsat 7 ETM+ sensor â€“ it also includes the panchromatic 15-meter band for spatial sharpening purposes. In this image, the waters of Mono Lake appear a bluish-black and vegetation appears bright green. You will notice the vegetation to the west of the lake and following the tributaries that enter the lake.

Mono Lake (thought to be one of the oldest lakes in North America) is located in eastern California at the transition between the Sierra Nevada to the west and the Great Basin Desert to the east. The lake is 25 km wide along its east-west axis. The basin that surrounds Mono Lake (much of which appears light pink in this image) was formed by tectonic faulting and downwarping and was completely filled with water in the last ice age (referred to as Lake Russell).

The geology of the former Lake Russell region is mainly made up of sedimentary Quaternary lake deposits. The basin is at the foot of the major fault scarp that forms the east side of the Sierra Nevada â€“ a huge block of granitic rock uplifted on the east and tilted to the west. The rock in the Sierra Nevada along the west edge of this image is chiefly granodiorite and granite. The relatively straight western edge of Mono Lake is bounded by a NW-trending fault. To find the fault, look for the green vegetation line in this area â€“ the increasing altitude to the west enables forest growth along the fault-line. Mono Lake has no outlet to the ocean making it a terminal lake. The water that enters the lake from surrounding streams can only exit by evaporation, leaving the lake’s salinity at 95% â€“ nearly three times the salinity of the ocean.

In 1941, to quench the thirst of a growing Los Angeles, diversion of water away from Mono Lake began and by the 1980s the lake’s volume and surface area had been cut in half. The lake would have continued to disappear if not for a grassroots effort to restore the lake to pre-diversion levels (which was successfully litigated in 1994). The rings around the periphery of the lake indicate the pre-1941 lake levels; these rings can be seen in this image â€“ especially on the northeast shore of the lake.

Medium-resolution images from Landsat afford us a synoptic view of regions and help us understand the tectonic and volcanic past of this location. In this image, many of the volcanic features in the Mono Lake vicinity can be clearly seen. Black Point is a basaltic cinder cone volcano that erupted under the waters of Lake Russell some 12,000 years ago. Black Point is nestled on the northwestern shore of the present-day lake and the black ash that covers it appears a reddish-purple hue in this image.

Paoha Island is the large island in the middle of the lake created by uplift caused by the movement of magma. The most recent eruptions in the area occurred from Negit Island (the small dark-colored island) in Mono Lake about 250 years ago.

To the south of Lake Mono in varying shades of purple, is the cluster of Mono Craters â€“ the series of plug-dome volcanoes that make up the youngest volcanic chain in North America. The northern most and youngest of these craters is Panum Crater which erupted less than 700 years ago.

The elevation variation in this image this over 5,000 feet!