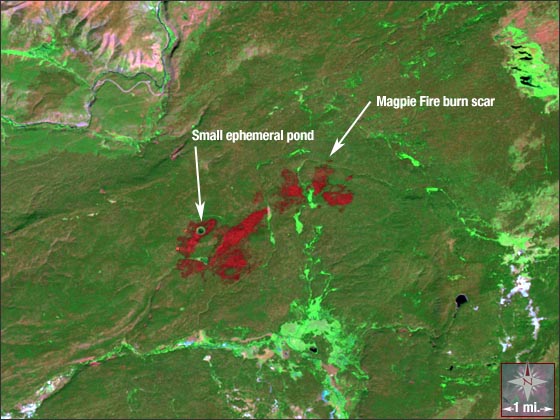 On July 17, fire lookouts in Yellowstone National Park spotted a backcountry blaze. The Magpie Fire, named after a nearby creek, was started by a lightning strike and has been burning in a mature Lodgepole Pine forest since mid-July. Since the blaze does not threaten any park structures or patrons, it has been managed by the park as a natural wildland fire and is considered part of the natural ecologic cycle. As of Sept. 12, just over 3,000 acres had been burned.

The fire mainly burns in the afternoon and evenings, so no smoke is visible in this Landsat 5 image collected the morning of Aug. 9, 2006. The fire is monitored daily from fire lookout towers, aerial reconnaissance, and by ground-based firefighters.