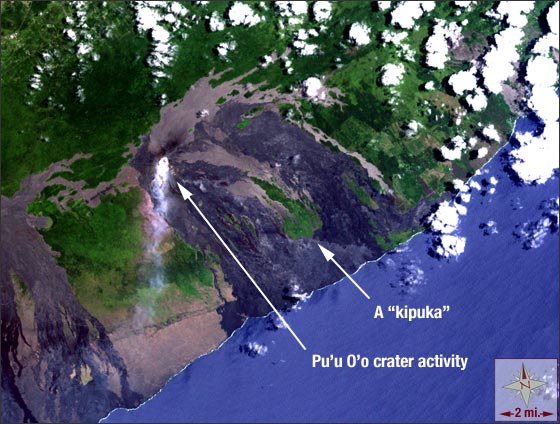 The big island of Hawaii keeps on getting bigger with the help of the world’s most active volcano: Kilauea. USGS geologists estimate that the Kilauea volcano has been active since its formation hundreds of thousands of years ago. The volcano has been an island since it emerged from the Pacific Ocean some 50,000-100,000 years ago.

Kilauea does not erupt from just one spot. There are three main areas where lava comes to the surface: the volcano’s summit and two rift zones. On the volcano’s east rift zone, the Pu’u O’o eruption has been spewing molten rock since 1983. According to the Hawaiian Volcano Observatory, the ongoing eruptions have razed 189 structures and over 8 miles of highway. Eruptions from Kilauea sometimes leave pockets of higher elevation land undisturbed while covering adjacent lower-lying land. The resulting island of land that is left untouched is referred to as a kipuka.

On this Landsat 7 image that was acquired on May 23, 2001, smoke from the Pu’u O’o eruption is visible. To the southeast of the crater, there is a large kipuka where the remains of the Royal Gardens subdivision can be found.