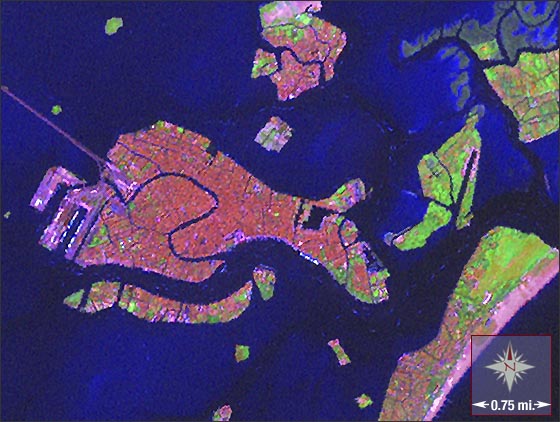 The city of Venice is located in northeastern Italy on the coast of the Adriatic Sea. The fish-shaped island, known for its extensive interconnecting canals, is a popular summer travel destination.

In this image, the Grand Canal can be seen meandering through the city from the bridge that connects Venice to the mainland (Ponte sulla Laguna) to the large Canal of San Marco. The ubiquitous terra cotta tiles of the Venetian roofs give the island its coral hue in this image.

This Landsat 7 image was acquired on Aug. 26, 2001. It is a pan-sharpened false-color composite of ETM+ bands 7, 5, and 3. Using the panchromatic band (ETM+ band 8) to sharpen an image creates an effective spatial resolution of 15 m. Venice can be found on Landsat WRS-2 Path 192 Row 28.