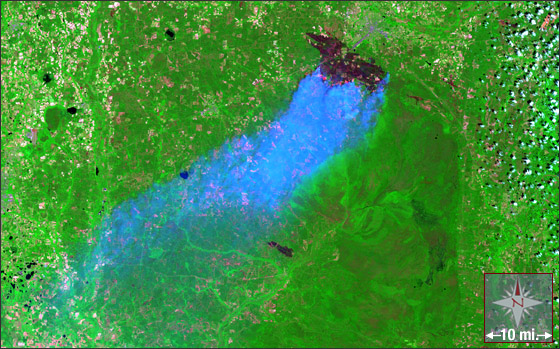 A severe drought in the U.S. southeast has created record-breaking fires along the Georgia/Florida border. Above, you can see a Landsat 5 image of the Sweat Farm Road fire in southern Georgia acquired on April 19, 2007. The fire started three days earlier, on April 16, when a downed-tree fell on a power line; strong winds and dry vegetation quickly turned the sparks into a major fire. As of June 1, the fire has burned 87,634 acres and cost an estimated $22.3M; it is 85% contained.

Important Note: Landsat data are used to generate vegetation, fire, and fuel characteristic maps for the United States as part of the LANDFIRE initiative. These maps are used to prioritize and manage both hazardous fuel reduction and post-fire ecosystem restoration.