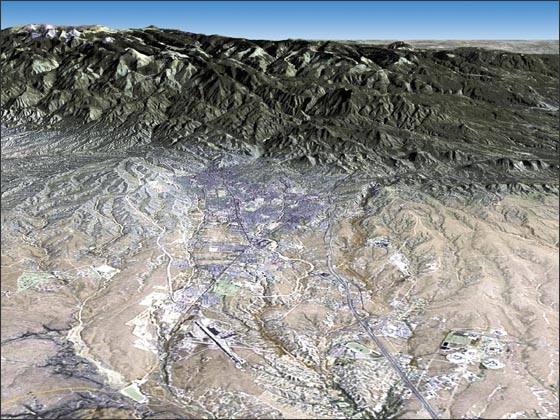 Nearly four-hundred years ago, Spanish explorers founded the city of Santa Fe, New Mexico (1607). The city is located in north central New Mexico, 7000 feet above sea level in the foothills of the Rocky Mountains. Santa Fe originally served as the capital of Spain's Nuevo MÃ©xico, and today it is the capital of the U.S. state of New Mexico.

The Spanish influence on the city is evident in its central plaza, as well as the San Miguel mission and the Palace of Governors, both built in 1610.

Santa Fe has long been recognized as an artistic city. In July 2005, the United Nations Educational, Scientific and Cultural Organization (UNESCO) appointed Santa Fe as the "City of Folk Art" within its Creative Cities Network. The city boasts of over 200 art galleries.

The 12,000 foot peaks of the Rocky Mountains create a vivid backdrop for the city. The perspective image featured above was created by overlaying a Landsat 7 image acquired on Oct. 14, 1999 over data from the USGS National Elevation Dataset (NED). The Landsat image uses ETM+ bands 7,4,2 and the panchromatic band; the image has been color-balanced to appear in "natural hues". Image processing was performed by the Landsat Project Science Office and the image visualization was done by Jesse Allen of NASA's Earth Observatory team.