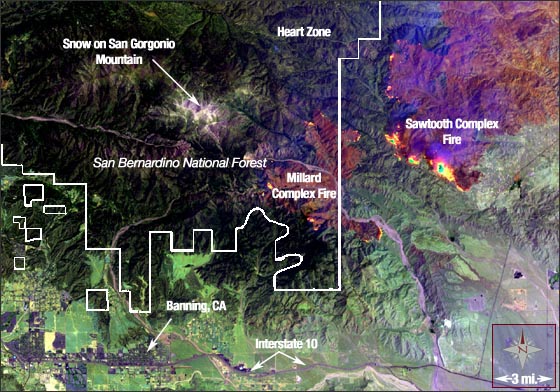 On July 9, 2006 lightning started two fires east of San Bernardino. This Landsat image shows the active fronts of those two fires, the Milard Complex Fire and the Sawtooth Complex Fire on Friday, July 14, 2006. The two fires combined in the Heart Zone (near Onyx Peak, in the San Bernardino National Forest) on July 19 into the Heart-Milard Wildfire. After burning over 61, 000 acres of land, the fires in the Sawtooth Zone were contained. However, as of noon on July 20, the Heart-Milard Wildfire was close to 25, 000 acres and only 60% contained.

In this image, the active fire fronts appear a bright yellow and the burn scars created by the flames appear a pinkish-red. Forested areas are dark green. Patches of snow on San Gorgonio Mountain, the highest peak in Southern California, appear white.

The rugged terrain in the San Gorgonio Wilderness Area makes much of this area inaccessible by foot. The fire in this region was mainly fought from the air.