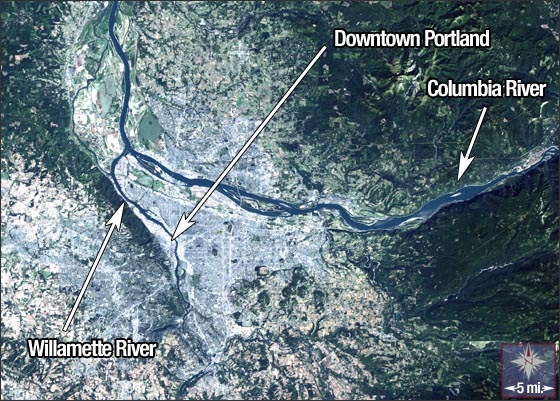 Just south of the confluence of the Columbia and Willamette Rivers sits the city of Portland, Oregon. In 1843, William Overton and Asa Lovejoy filed the original land claim for the 640-acre parcel of open land lying on the western bank of the Willamette River, where downtown Portland is today.

Two years later Overton sold his rights to the land to Francis Pettygrove. Pettygrove hailed from Portland, Maine and Lovejoy had roots in Boston, Massachusetts and both wanted to name the new city after their hometown. A coin toss in Pettygrove’s favor gave Portland, Oregon its name.

Portland is sometimes referred to as Bridgetown, as ten bridges cross the Willamette River in the city, including Steel Bridge, which is recognized as the world's only telescoping double-deck vertical lift bridge. The lower deck, which accommodates trains, bikes, and pedestrians, can be raised independently from the upper deck which carries cars and the light rail.

Portland has a population of just over half a million people and it has been lauded for its 227 parks, which include the nation’s largest urban wilderness (Forest Park).

Portland’s climate is classified as a Marine West Coast Climate. The Pacific Ocean 70 miles to the west and the Cascade Mountain Range immediately to the east, influence the city’s temperate climate. The summers are typically dry with highs averaging around 80° F, while winters are mild—temperatures rarely drop below freezing—but wet with a persistent drizzle.