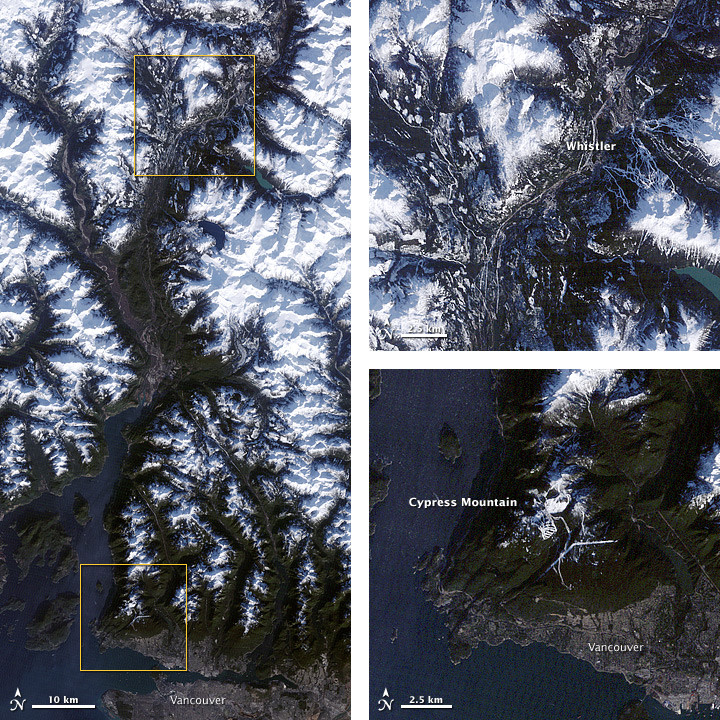 In early February 2010, organizers were putting the finishing touches on venues for the 2010 Winter Olympic Games in Vancouver, British Columbia. Two months earlier, on December 6, 2009, the Thematic Mapper Plus on NASA’s Landsat 7 satellite captured a detailed image of the area where the games will be held.

The image on the left provides a view of the area from Vancouver northward to the Whistler skiing village. Areas outlined in yellow delineate close-up views on the right. The top close-up shows venues near the village of Whistler, where Nordic and alpine skiing events will be held. The bottom close-up shows Cypress Mountain, the planned venue for freestyle skiing and snowboarding, among other events.

After unusually warm conditions in January 2010, snow remained scarce on Cypress Mountain. The Los Angeles Times reported that snow was being trucked to Cypress Mountain from higher elevations, and Vancouver Now reported that organizers had placed tubes filled with dry ice on courses to keep surrounding snow from breaking down. A surprise snowstorm struck on February 10, just two days before the games opened, boosting the snowpack. The snowstorm did not, however, change the short-term forecast for rain.