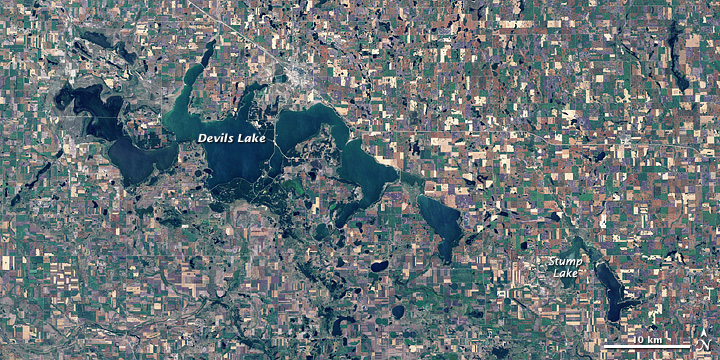 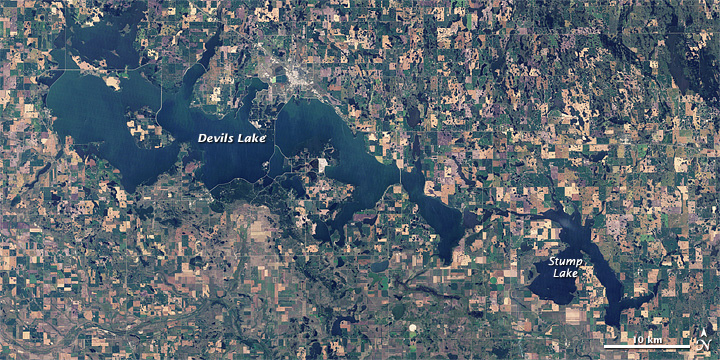 North Dakota’s Devils Lake occupies a basin within a basin. The surrounding basin is that of Red River, but because Devils Lake’s own basin is closed, the lake must reach a sufficient water level before the water travels elsewhere. At a water level of 1,447 feet (441 meters) above sea level, Devils Lake spills into neighboring Stump Lake. At a height of 1,459 feet (445 meters) above sea level, both lakes spill into a Red River tributary, the Sheyenne River. Geologists suspect that the overflow into the Sheyenne has occurred at least twice in the last 4,000 years. In the 1990s, Devils Lake began a fresh round of flooding.

The Thematic Mapper on NASA’s Landsat 5 satellite captured these true-color images on August 11, 1984 (top), and September 1, 2009 (bottom). The graph below the images tracks the surface elevation of Devils Lake from the late nineteenth through the early twenty-first centuries. By the late 1990s, Devils Lake rose high enough to begin flowing into Stump Lake. The change in water level over 25 years is obvious in these images. Compared to the image from 1984, the image from 2009 shows that Devils Lake has expanded dramatically, and Stump Lake has grown from a small sliver to a large, curving water body.

Devils Lake’s rising waters have caused considerable grief to the nearby community. According to the U.S. Geological Survey, the flooding has destroyed hundreds of homes and businesses, and flooded thousands of acres of farmland. According to a fact sheet from the North Dakota State Water Commission, state and federal government flood-mitigation expenditures have topped more than $450 million, and included moving roads, railways, and power lines, and building dikes. Although an inlet between Devils Lake and the Missouri River system might mitigate flooding, the risk of invasive species led to the prohibition of such an inlet in the Dakota Water Resources Act of 2001. Despite the frustrations it causes local residents, Devils Lake is home to a fishery and multiple species of migratory waterfowl.