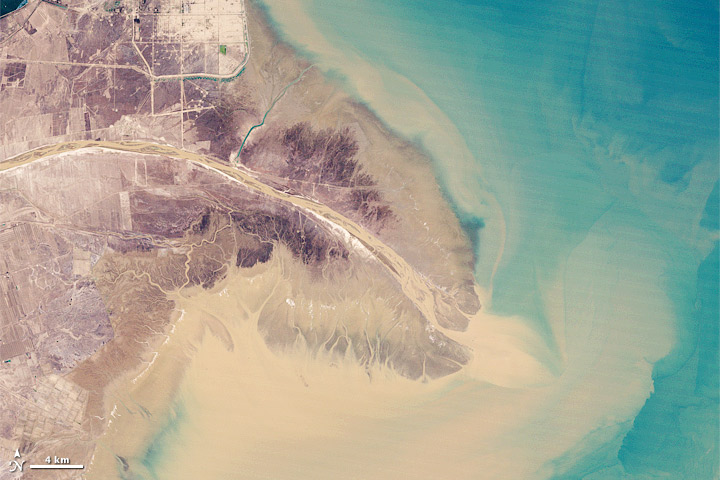 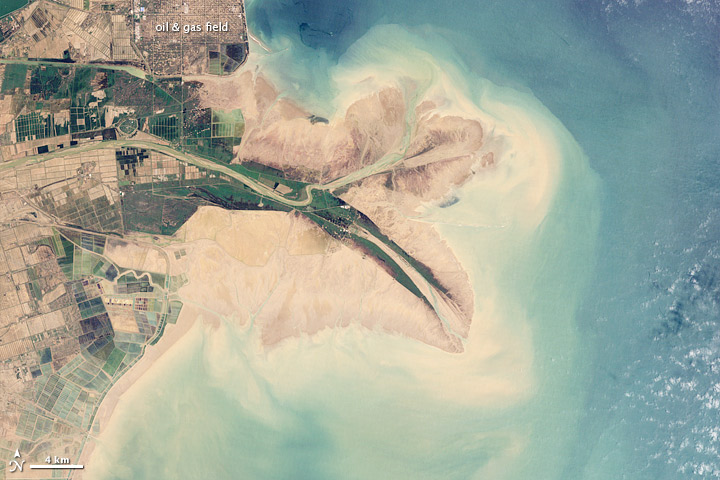 China’s Huang He (Yellow River) is the most sediment-filled river on Earth. In the lower reaches, where the current slows, the natural accumulation of sediment in the riverbed has caused the river to change course often in the past. Since the mid-nineteenth century, however, the lower reaches of the river and the delta have been extensively engineered to control flooding and to protect coastal development.

This pair of natural-color images from NASA's Landsat satellites shows the Yellow River Delta at the river mouth in 1989 and 2009—two images from a series showing the delta at five year-intervals over the past two decades. In 1989, the river’s main channel emptied into the Bohai Sea in a southeast-bending arc. In 1996, Chinese engineers blocked the main channel and forced the river to veer northeast, delivering sediment to a new location. By 2009, a new peninsula had formed, the old one had retreated, and shoreline northwest of the new river mouth had filled in considerably.

The filling-in of that section of shoreline may be the outcome that the engineers were anxious to achieve: the land northwest of the newly fortified shoreline is home to an extensive field of oil and gas wells. Their protection is a primary concern.

Although levees, jetties, and seawalls allow officials to slow erosion and direct the flow of the river, other challenges to protecting the delta’s natural wetlands and its agricultural and industrial development remain. Water and sediment flows to the delta have declined dramatically since the 1970s, due to both reduced rainfall and explosive urban and agricultural demand for water upstream. In the 1990s, the river frequently ran dry well before reaching the delta.