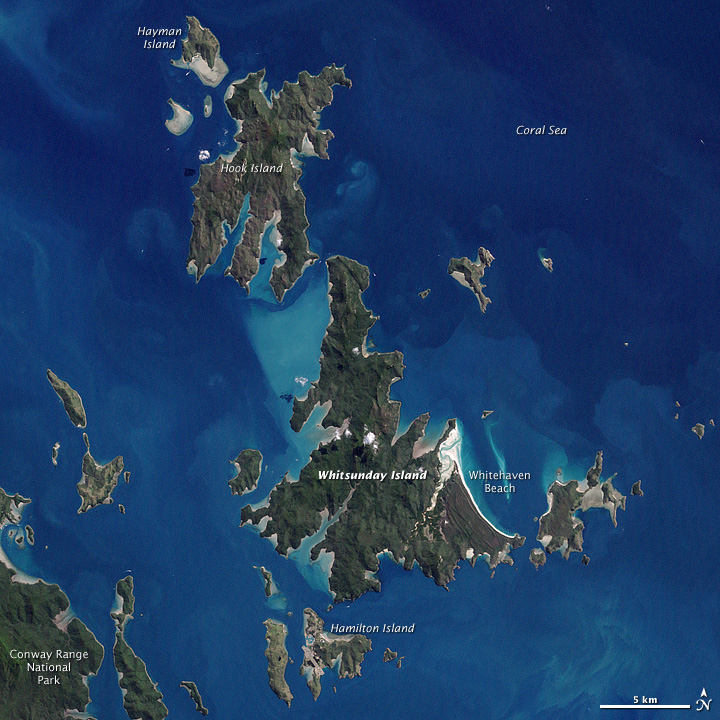 This photo-like image of the core of the Whitsunday Islands was acquired by the Enhanced Thematic Mapper Plus (ETM+) instrument on NASA’s Landsat 7 satellite on May 22, 2003. The entire chain of islands and the outer reef section of the Great Barrier Reef appear in the large image. The scene is dominated by the largest island and namesake of the chain. Deep green forest covers most of Whitsunday Island, which is outlined by brilliant white sand beaches, the largest and most dramatic being Whitehaven Beach at the southeastern end of the island.

On Hamilton Island, the strong linear feature at the southern end shows where a jet-accessible runway was added to allow airlines from major Australian cities to fly directly to the islands. The swirls of pale blue around the islands show a mix of sandy bottom waters and shallow, fringing coral reefs. The green land in the southwestern corner of the image is a small section of Conway Ranges National Park, on the shoreline of mainland Queensland.

The island’s name comes from the journals of Captain James Cook who sailed through the area in early June 1770. He christened the largest island in honor of the date he arrived, Whit Sunday, the seventh Sunday after Easter. (The name stuck even after it was discovered that a date error meant it was actually Monday when Cook’s ship, the Endeavour, arrived.)

The islands, parks, and resorts of the Whitsunday Islands are among the most popular tourist destinations for visitors to the Great Barrier Reef; boat trips from the mainland and Hamilton Island take visitors to the Outer Reef and to destinations in and around the islands. The waters between the mainland and these islands was used during the Second World War as a shelter from storms (and detection by Japanese forces) for the U.S. Navy prior to the Battle of the Coral Sea.