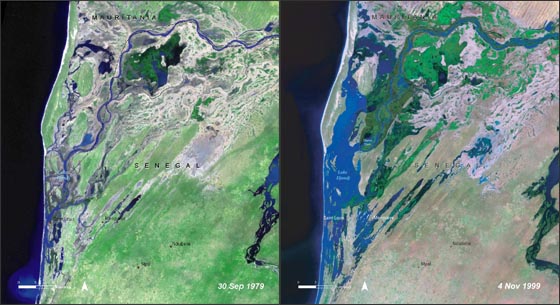 In August 2006, the United Nations Environment Programme (UNEP), released an atlas entitled: "Africa's Lakes: Atlas of Our Changing Environment." The atlas relies heavily on Landsat imagery from the past 34 years to show changes in lakes around the African continent.

"The image from September 1979 shows the impact of drought on the Djoudj Sanctuary, while the image from November 1999 shows rejuvenation of the sanctuary wetlands due to the significant floods of that year. The two images vividly depict the impact of climate variability on the Djoudj Sanctuaryâ€”and demonstrate the broader need for close monitoring of the impacts of climate variability and climate change on lake environments."