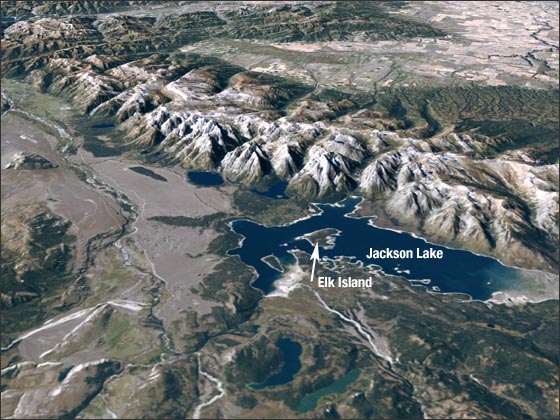 Grand Teton National Park is located in northwestern Wyoming, just south of Yellowstone National Park. The park was designated in 1929 and expanded to its present-day size in 1950.

The jagged peaks of the Teton Range rise to 13,770 feet, which is more than 7,000 feet above the valley below. In this Landsat image, the snow-covered peaks appear white. Winters in Grand Teton National Park are long and harsh. Temperatures as low as -63Âº F have been recorded!

This Landsat 7 image was acquired on September 23, 2002. The perspective image was created by merging digital elevation data (from both DEMs and SRTM data) with a true-color Landsat 7 image (ETM+ bands 3, 2, and 1). There is no vertical exaggeration. Grand Teton National Park is found on Landsat WRS-2 Path 38 Rows 29 and 30.