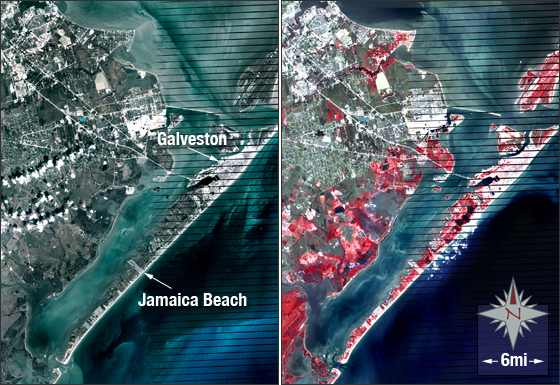 Although the devastation that Hurricane Ike left behind is obvious on the ground, it is also obvious from the satellites in space that fly overhead. One satellite that captured the "scarring" of Galveston and coastal Texas was the Landsat satellite. Using a comparison of before and after imagery and a color-enhancement of the scarred area, the damages are easy to identify from space.

These images of the Galveston, Texas area were created using data from Landsat. The first is a true color image taken on October 12, 2007 almost a year before Hurricane Ike came ashore. Hurricane Ike came ashore in Texas at 2:10 a.m. CDT, Sept. 13, and brought a wall of water over 13 feet high, sweeping through Galveston Island, and on the mainland. Ike made landfall with sustained winds near 110 mph, just 1 mph short of a Category 3 hurricane.

The second image was created from Landsat data on Sept 28, 2008. It was color-enhanced with some hue and saturation adjustments to better show the scarring of the land from the hurricane.

By boosting the color saturation of those newly exposed reddish soils, Landsat image processor Mike Taylor was able to create the post-Ike image you see here which clearly indicates the areas of significant scarring.

The Landsat Program is a series of Earth-observing satellite missions jointly managed by NASA and the U.S. Geological Survey. Since 1972, Landsat satellites have collected information about Earth from space. This science, known as remote sensing, has matured with the Landsat Program.

Landsat satellites have taken specialized digital photographs of Earth’s continents and surrounding coastal regions for over three decades, enabling people to study many aspects of our planet and to evaluate the dynamic changes caused by both natural processes and human practices.

As of October 10, there were still 157 people missing from Galveston and coastal Texas, according to the nonprofit Laura Recovery Center (http://www.lrcf.net/Ike/display.names.cgi). Of those, many are from Galveston. Others are from Gilchrest, Pasadena, Bacliff, Beaumont, Crystal Beach, Dickinson, Hitchcock, Houston, Jamaica Beach, Lamarque, League City, Missouri City, Port Bolivar, Seabrook, Shepherd, San Leon, and Wharton. Anyone looking for a missing person or anyone with information about a missing person can contact the Laura Recovery Center at 281-482-5723.