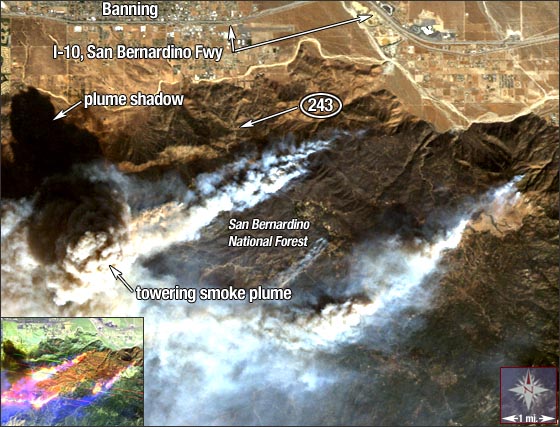 Just after 1 a.m. on Thursday, Oct. 26, 2006 an arsonist started the Esperanza Fire in San Bernardino National Forest. By the time the Landsat 5 satellite flew over this area, approximately ten hours later, 40 mph Santa Ana winds had helped the blaze swiftly spread through thousands of acres of highly flammable, dense, thorny bushes known as chaparral. Five firefighters from U.S. Forest Service Alandale Engine 57 gave their lives trying to protect homes from the blaze. Ken Pimlott of the California Department of Forestry & Fire Protection, told Newsweek, "It’s a lot more labor intensive to work in the heavy chaparral, or brush, fuels. It’s a lot more difficult to move around because of the thick brush. And you have to cut through brush that is eight or 10 feet tall."

It took 92 fire engines, 54 fire crews, and three helicopters to contain the Esperanza Fire. According to the California Department of Forestry & Fire Protection, the fire burned 40,200 acres, 34 homes and 20 outbuildings (at an estimated cost of $9.9 million) before being contained.

Important Note: Landsat data are used to generate vegetation, fire, and fuel characteristic maps for the United States as part of the LANDFIRE initiative. These maps are used to prioritize and manage both hazardous fuel reduction and post-fire ecosystem restoration.