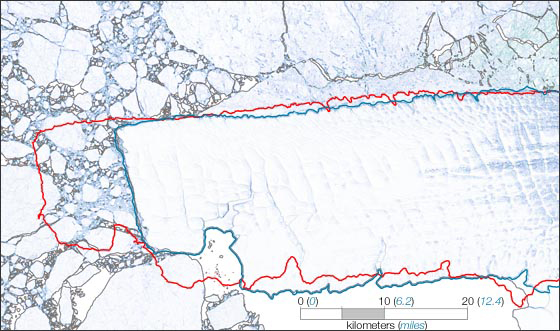 The Drygalski Ice Tongue juts out from the icy land of Antarctica into McMurdo Sound like a pier. Drygalski is a floating extension of a land-based glacier. It is one of the largest floating objects in the world, and contains ice that first fell as snow on the ice sheet thousands of years ago. Change is the norm for all glaciers, even for a behemoth the size of Drygalski. Glacier creation begins when more snow falls than melts, and gradually builds up over time. Eventually the weight of the snow squeezes out the air in the layers of snow beneath, until the compressed snow turns into ice. Forced by the weight of the accumulating ice, the glacier flows slowly downhill to lower elevations like a river in slow motion. Ice tongues like Drygalski normally change their size and shape as waves and storms weaken their ends and sides, breaking off pieces to float as icebergs.