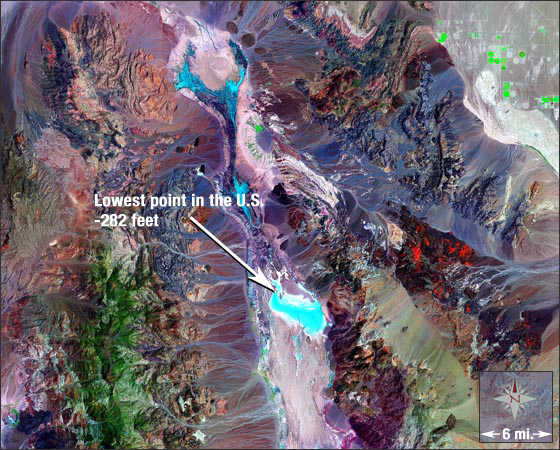 Death Valley lies between the Panamint and Amargosa mountain ranges in eastern California. The valley is the lowest, driest and hottest place in the United States.

The elevation range of the region is immense. A portion of the Badwater saltpan is 282 feet below sea level while nearby mountain peaks reach over 11,000 feet. The annual precipitation in Death Valley is a mere 1.9 inches and temperatures typically soar to 130° F on summer days and can fall below freezing on winter nights.

The harsh environmental extremes of Death Valley make human existence there difficult. The valley was named by a small group of 49ers that survived crossing the valley en route to the gold mines of California in 1849. In the Landsat 7 image featured above, saltpans, left from ancient lakes, appear bright blue. When Pleistocene glaciers covered the Sierra Nevada Mountains, rivers created a freshwater lake in Death Valley that geologists surmise was 600 feet deep.

And, as recently as the Holocene era (2000-4000 years ago), mountain streams filled Death Valley to a depth of nearly 30 feet. As temperatures increased, this shallow lake evaporated into small salty pools in the lowest sections of the valley. Today, saltpans (three to five feet thick) mark where these pools once were.

This Landsat 7 image was acquired on June 11, 2000. The pseudo-natural color image, is a composite of ETM+ bands 7, 4, 2 and the panchromatic sharpening band. Death Valley is found on Landsat WRS-2 Path 40 Row 35.