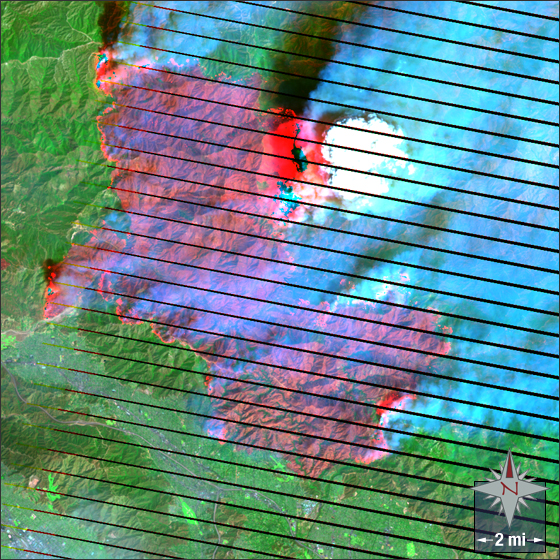 By September 2, 2009 the Station Fire in southern California has grown to over 140,000 acres within the Angeles National Forest and threatens over 12,000 homes in the foothill communities of La Canada-Flintridge, La Crescenta, Acton, Soledad Canyon, Pasadena and Glendale. Additionally, the 105-year old Mt. Wilson Observatory is also being threatened.

The fire started on Wednesday, August 26. Due to a lack of recent fires and drought conditions in the area there is plenty of fuel to feed the fire and the terrain in most areas is steep and relatively inaccessible, making fighting the fire from the ground difficult.

In this Landsat 7 image aquired on August 30, 2009, the blue and white haze is smoke from the fires. The pinkish-colored areas are regions that have been burned and the active fires appear bright red. The dark lines in the image are the result of the scan line corrector malfunction.

This Landsat 7 image is a vital source of information needed by firefighters to control the Station fire and reduce the chances for loss of lives and property. Landsat 7 is a 10-year old satelliteâ€”5 years past it's design lifeâ€”that is still collecting data important to firefighters.

Efforts are underway to replace Landsat 7 and to ensure that high quality Landsat data are available for many years into the future.