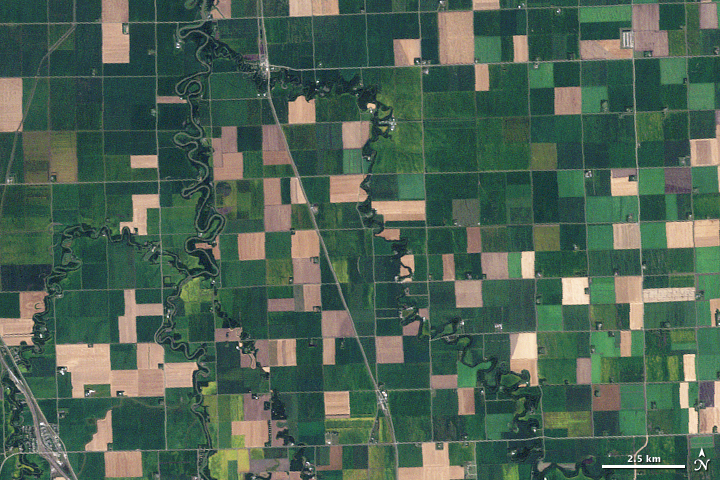 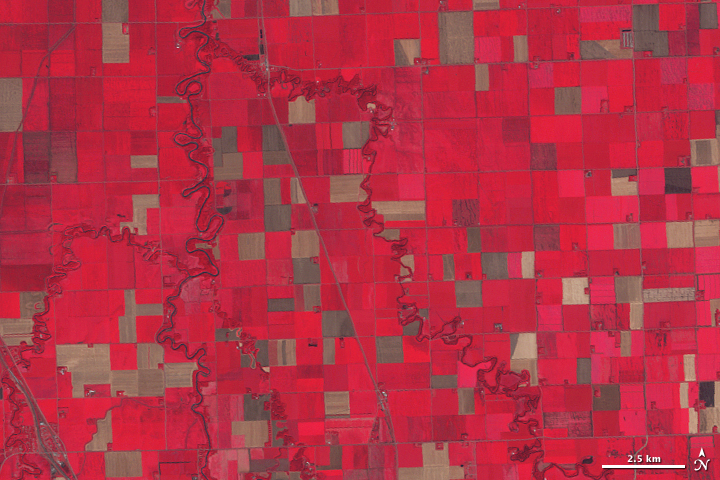 From space, Noreen Thomas’ farm in northwest Minnesota looks like a patchwork quilt. Fields change hue with the season and with the alternating plots of organic wheat, soybeans, corn, alfalfa, flax, or hay. Thomas enjoys this view from hundreds of miles above Earth’s surface—not just for the beauty, but the utility. She is among a growing group of Midwest farmers who rely on satellite imagery from Landsat to maximize their harvest and minimize damage to their fields. It’s become another crucial tool like their tractors and sprinklers.

The top true-color image, taken by the Landsat satellite on September 10, 2009, shows Thomas’s organic farm along the banks of the Buffalo River near the center of the image. Lush green fields dominate the image, though some crops have already been harvested leaving squares of tan and brown. The lower image shows the same scene in false color. Made with infrared light, the false-color image provides a wealth of information about crop conditions.

To the untrained eye, the false-color images appear a hodge-podge of colors without any apparent purpose. But Thomas is now trained to see yellows where crops are infested, shades of red indicating crop health, black where flooding occurs, and brown where unwanted pesticides land on her chemical-free crops.

The images help the Thomases root out problems caused by Canadian thistle and other weeds. They help confirm that their crops are growing at least 10 feet from the borders of a neighboring farm—required to maintain organic certification. They can also spot the telltale signs of bottlenecking in the fields—where flooding is over-saturating crops—and monitor the impact of hail storms.

“We’d have to walk our entire 1,200 hundred-plus acres on a regular basis to see the same things we can see by just downloading satellite images,” said Thomas, who recently began providing her farm’s coordinates to her buyers in Japan. “There’s no more ideal way I know to show how healthy our crops are to someone thousands of miles away.”

Adapted from Snapshots from space cultivate fans among Midwest farmers.