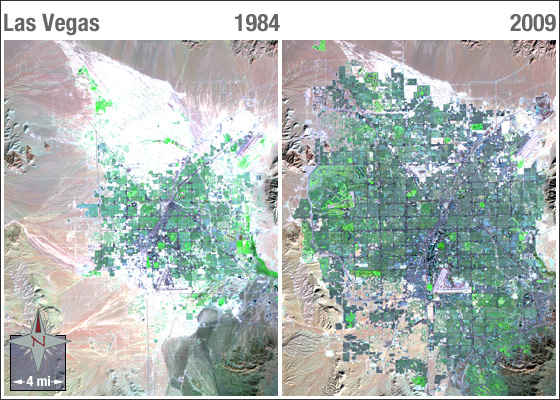 In the 25 years that Landsat 5 has been in orbit, the desert city of Las Vegas has gone through a massive growth spurt. The outward expansion of the city over the last quarter of a century is shown here with two false-color Landsat 5 images (1984 and 2009). You can see the dark purple grid of city streets and the green of irrigated vegetation grow out in every direction into the surrounding desert.

Landsat data have been instrumental to our increased understanding of forest fires, storm damage, agricultural trends, and urban growth. Studies using Landsat data have helped land managers keep track of the pace of urbanization in locations around the world.

These Las Vegas images were created using reflected light from the shortwave infrared, near-infrared and green portions of the electromagnetic spectrum (Landsat 5 TM bands 7,4,2). The 1984 image was acquired in October, seven months after the launch of Landsat 5. The 2009 image was collected in January. On March 1, 2009, Landsat 5 celebrates the 25th anniversary of its launch.