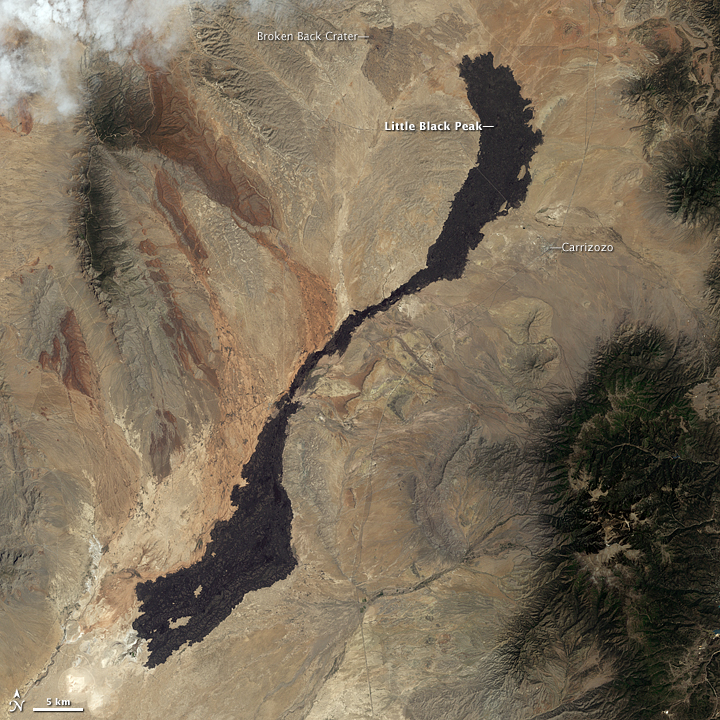 In south-central New Mexico, some 25 kilometers (15 miles) north of the brilliant white gypsum deposit that includes White Sands National Monument, a charcoal-brown scar undulates across the arid landscape. The scar is the Carrizozo Malpais, a massive lava flow left over from volcanic activity that occurred several thousand years ago. Stretching roughly 75 kilometers (47 miles), Carrizozo is one of Earth’s longest known lava flows from the Holocene Epoch (the geologic time span since the end of the Pleistocene Ice Age).

The enhanced Thematic Mapper on NASA’s Landsat 7 satellite captured this photo-like image of Carrizozo Malpais on May 18, 2003. The flow varies in width from 1 kilometer (0.6 miles) along its slender neck to 5 kilometers (3 miles) at either end. Within its curving borders, the Carrizozo lava flow has a uniform dark color, thanks to its basalt content. Basalt tends to flow easily, and this lava flow is described as a pahoehoe flow—advancing through lobes or toes that separate from a cooled crust. The high point on Carrizozo is Little Black Peak. This is a cinder cone—a simple type of volcano made from congealed droplets and blobs of lava that erupted from a single vent.

The Carrizozo lava flow originated from a shield volcano with a low, broad profile resembling an ancient warrior shield. The lava’s composition enabled it to flow easily down the Tularosa Basin, an area of depressed rock in southern New Mexico. Geologists suspect that this massive lava flow occurred in a single episode that lasted 20 to 30 years, and date the surface of Carrizozo at roughly 5,200 years old. An older, less conspicuous lava flow emanated from Broken Back Crater to the north.

Near the lava flow’s northeastern end is the town of Carrizozo. Both southeast and northwest of the lava flow, the landscape appears dark, but this results not from volcanic rocks but from vegetation-lined hills.