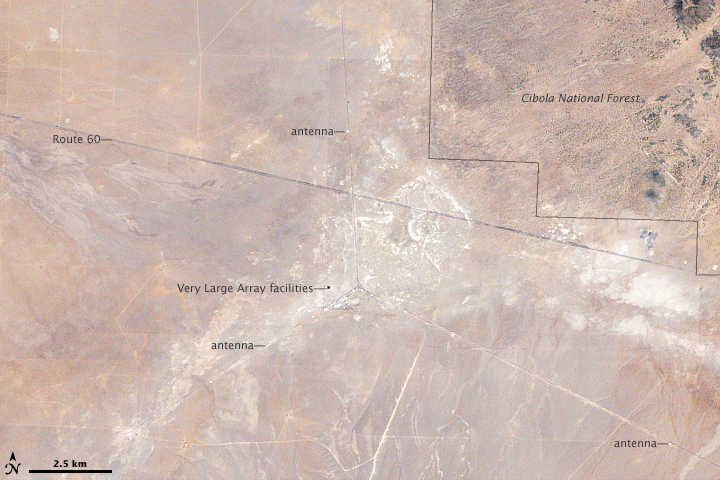 The Cibola National Forest surrounds the Plains of San Augustine in a remote and sparsely populated region of New Mexico. Located roughly 90 kilometers (50 miles) west of Socorro, New Mexico, the forest encompasses “lowlands” down to elevations of 1,500 meters (5,000 feet), and it drapes around a range of mountains with peaks as high as 3,425 meters (11,301 feet).

The mountains shelter the central valley from the radio frequency transmissions of civilization—such as the city of Albuquerque roughly 118 kilometers (73 miles) to the northeast—making it a good location for radio astronomy. In fact, the plains are home to one of the world’s premier astronomical radio observatories, the Very Large Array (VLA), a set of 27 identical radio dishes spread out across the plains. Among the VLA’s major contributions to space science and astronomy, it was here that NASA listened for the transmissions from the Voyager 2 spacecraft as it flew past Neptune in 1989.

Some elements of the array are visible in this Landsat satellite image of the region from May 6, 2002. Several faint lines are arranged in an inverted Y shape in the lower image. The Y shape is punctuated in places by white dots. The dots are the radio dishes. With a diameter of 25 meters (82 feet), the dishes are slightly smaller than the resolution (level of detail) of Landsat 7 (image pixels are 30 meters by 30 meters), but they show up in the image because their bright white surfaces make such a sharp contrast to the dark ground around them.

The inverted Y is the railroad tracks and service roads that connect the dishes. The array can be rearranged by shifting the dishes to different configurations along the railroad tracks. At the time of this Landsat image, the VLA was spread out in its widest configuration. Every three months, the individual dishes are moved into one of four standard arrangements, giving astronomers access to different levels of detail and sensitivity to larger or smaller astronomical features.