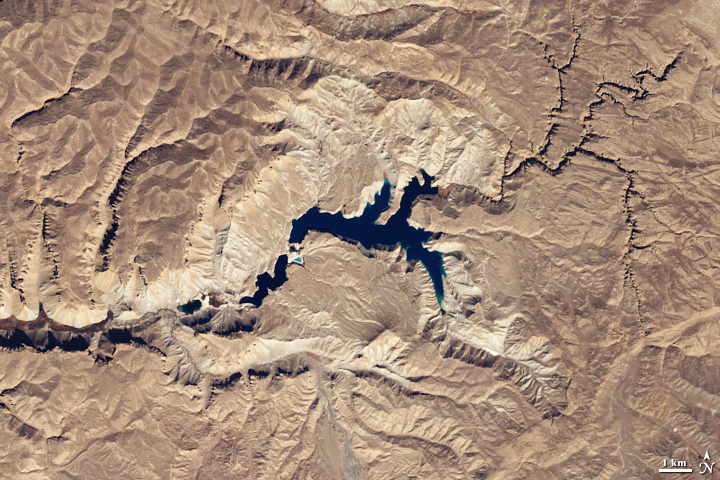 Afghanistan established its first national park on April 22, 2009, to promote and protect the natural beauty of a series of intensely blue lakes created by natural dams high in the Hindu Kush. Band-e-Amir is a chain of six lakes in the mountainous desert of central Afghanistan. The lakes formed from mineral-rich water that seeped out of faults and cracks in the rocky landscape. Over time, the water deposited layers of hardened mineral (travertine) that built up into walls that now contain the water. According to the Wildlife Conservation Society, who helped the Afghan government set up the park, Band-e-Amir is one of the few travertine systems in the world.

The Landsat-7 satellite acquired this image of Band-e-Amir on October 22, 2002. The starkness of the landscape highlights the ruggedness of the terrain around the lakes. Towering cliffs create sharp lines and shadows on the south side of many of the lakes. The lakes range in color from faint turquoise to deep blue.

On the ground, the lakes are famous for their intense and varying colors, an artifact of the minerals that fill the water and created the lakebeds. Band-e-Amir has also been nominated to be a World Heritage Site.