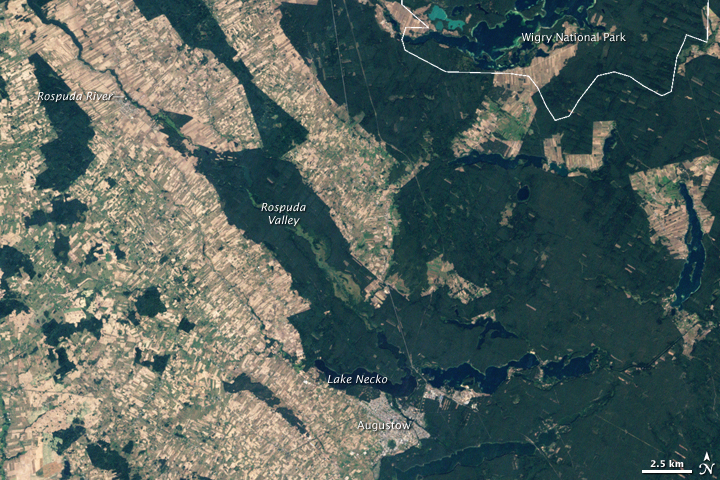 Poland’s Rospuda Valley is home to a peat bog—a wetland area that collects dead plant material. Although peat bogs were once common in cool, temperate climates like Northern Europe’s, few have survived the changes people have made to the landscape for agriculture and other development. The peat bog in Rospuda Valley is one of Europe’s last pristine wetlands. Located in northeastern Poland near the Lithuania and Belarus borders, Rospuda Valley is part of a protected wilderness area known as the Augustów Primeval Forest.

NASA’s Landsat 7 satellite captured this image of Rospuda Valley on September 11, 2002. This true-color image shows a patchwork of peat bog and agricultural fields. In contrast to the nearly uniform deep-green wetlands, the fields appear as close-knit rectangles of varied shades of green and beige. Rospuda River meanders between cultivated fields in the northwest and wetland territory in the southeast, connecting with Lake Necko. Numerous other lakes and ponds appear north and east of Lake Necko, some of them overlapping agricultural areas.

East of Rospuda Valley, fine straight lines indicate roads. Road construction in the area became controversial in 2007. The wetland lies in a region that sees frequent truck traffic to and from Lithuania. A plan to alleviate the volume of truck traffic through local towns by building a road through the Rospuda Valley was fought by environmental groups, who cited the rarity of peat bogs in industrialized Europe, and the importance of preserving rare plant and animal species living in the valley. In 2007, the European Commission sought a court order to halt construction of a viaduct that would intersect part of Rospuda Valley. In early 2009, Poland determined a different route for the roadway to spare this reserve.