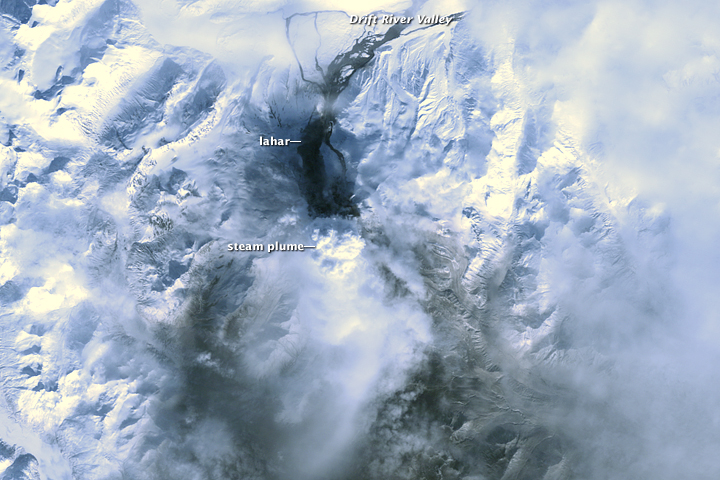 After weeks of heightened seismic activity, Alaska’s Redoubt Volcano began erupting explosively on the night of March 22, 2009. On March 26, 2009, the volcano erupted again, sending a column of ash some 19,800 meters (65,000 feet) above sea level, and sending a lahar—a slurry of water and volcanic debris—through the Drift River Valley.

NASA’s Landsat 5 satellite captured this true-color image of Redoubt Volcano and its immediate surroundings on March 26, 2009. Against the backdrop of a snowy landscape, the volcano’s steam plume must be found by its texture rather than its color. Above the volcano summit, the vapor billows like giant balls of cotton. On either side of the steam plume, brown volcanic ash appears. Although some of the ash is probably airborne (a large swath of airborne ash appears in a wider view of the area acquired on the same day), some of the ash has settled on the ground. Settled ash is especially apparent east of the plume, where small ridges appear surrounded by darker ash. North of the volcano summit, the lahar appears nearly black, narrowing into the Drift River Valley.

Redoubt is a stratovolcano composed of alternating layers of hardened lava, solidified volcanic ash, and debris produced by earlier eruptions. Sitting on the western side of Cook Inlet, the volcano rises to a height of 3,106 meters (10,197 feet). It is part of the Pacific “Ring of Fire”—a horseshoeâ€“shaped zone of heightened seismic activity around the Pacific Ocean Basin.