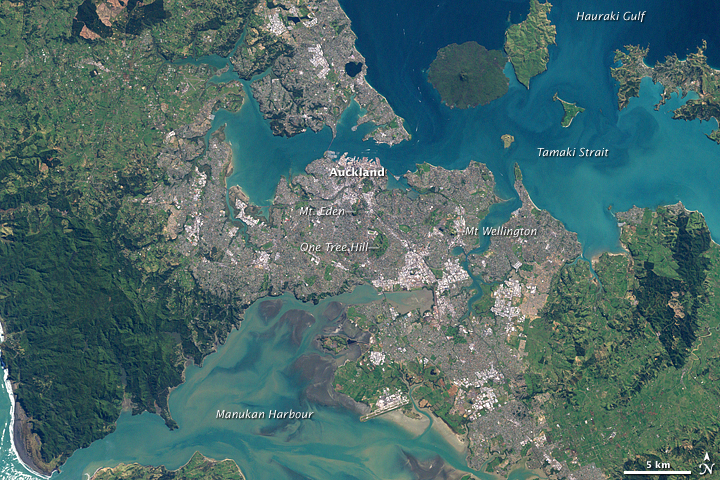 Auckland, New Zealand’s largest city, is located on the country’s North Island. Nearly a third of New Zealand’s population lives in Auckland—just over one million people. This natural-color (photo-like) image of Auckland was acquired on August 27, 2002, by NASA’s Landsat 7 satellite. The most densely developed areas appear white and gray, while suburban areas appear grayish green—a mixture of houses, streets, and lawns. The city spreads out across various peninsulas surrounding Tamaki Strait and other bays and inlets.

The city has been built up around the Auckland Volcanic Field; within a 20-kilometer (12.4-mile) radius of the heart of the city, there are 49 volcanoes, most of them small cones less than 150 meters (492 feet) high. Many of them have been protected as parks or non-residential development, such as ball fields, and so they stand out as green circles of vegetation against the surrounding gray and white cityscape. A few of the most distinct of these urban volcanoes are labeled in this image: Mt. Eden, One Tree Hill, and Mt. Wellington. Among the largest of the volcanoes is Rangitoto Island, which sits offshore of the city between the waters of Tamaki Strait and Hauraki Gulf.

The last eruption in this volcanic field appears to have occurred about 600 years ago. The nature of volcanic activity in the area is different from the subduction-driven volcanism elsewhere on the North Island, such as at Mount Ruapehu. It results from the city’s location above a mantle plume, a hot spot about 100 kilometers below ground where temperatures are high enough to melt rock. The melted rock has a low viscosity, and it flows easily up through the overlying rock.