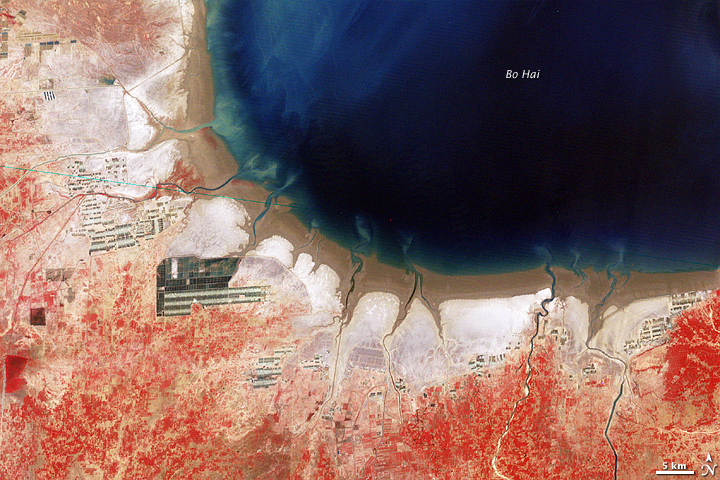 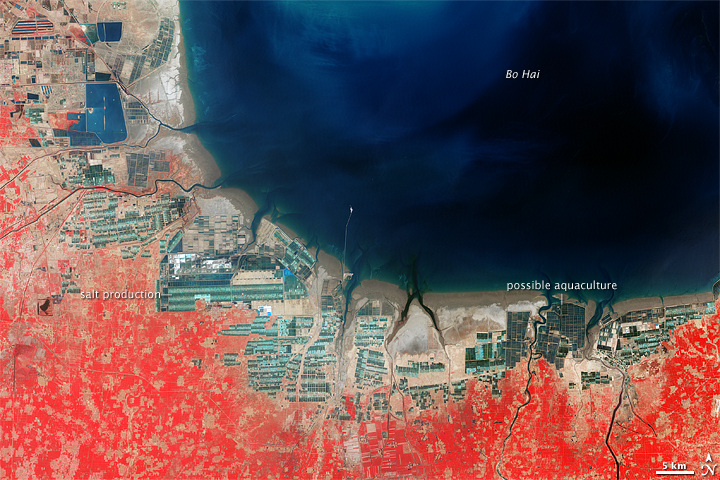 The final decades of the twentieth century brought rapid development to eastern China’s Bo Hai coast, where the nearby sea supported both salt production and aquaculture.

Developed areas appear in both images as grids of straight lines and sharp angles. In the 1979 image, isolated industrialized areas appear scattered along the coast, the largest appearing where the coast curves northward. In the 2000 image, developed areas have swallowed up most of the coastline, with blue, aquamarine, and off-white rectangles replacing what was previously bare ground.

Some of the development in this area produced salt. The production of sea salt generally involves drawing salty water into a series of reservoirs where the water slowly evaporates, forming concentrated brine, and finally crystallizing. The networks of reservoirs in this image that are filled with progressively lighter liquid likely result from such a salt production process. The 2008 discovery of an ancient salt works some 10 kilometers (6 miles) from the Bo Hai coast in China’s Shandong Province attests to the region’s long history in salt making.

Other developed areas involved aquaculture, also known as mariculture. Similar to shrimp farms in Honduras and Ecuador, aquaculture farms in this image appear near the coast, with close-knit reservoirs of water. Aquaculture provides both employment and food security, but poorly planned operations can damage or destroy habitat, and produce waste products that infiltrate local sediments. Runoff can transport those sediments to areas beyond those originally used for aquaculture. According to the United Nations Environment Programme, the Bo Hai Sea ranks among the world’s most intensely exploited aquaculture regions.