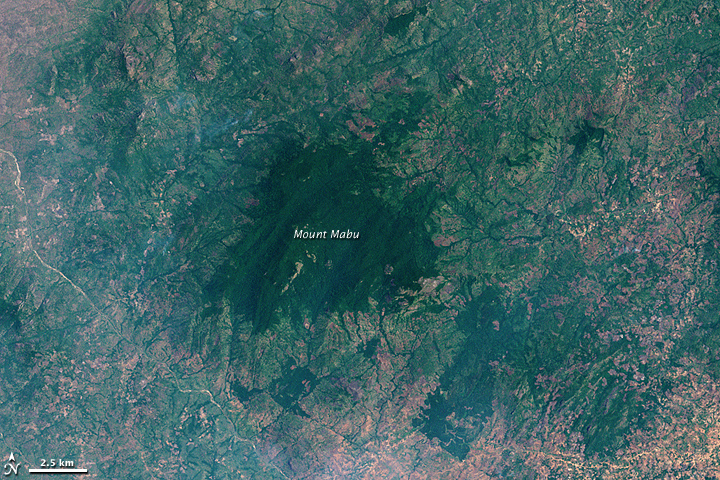 In 2005, researchers at the Royal Botanic Gardens, Kew stumbled upon secret: a little-known forest in northern Mozambique. The researchers were looking for a site for a conservation project, and hoped to find a rainforest worth preserving. They found their treasure through Google Earth, in the form of a largely untouched rainforest atop Mount Mabu, surrounded by developed land. The scientists weren’t the only ones who knew of this forest; local villagers knew about it, but few citizens of Mozambique had heard of its existence. The forest’s remote location and value as a refuge for locals fleeing a 1975-1992 civil war saved it from development.

The Enhanced Thematic Mapper Plus on NASA’s Landsat 7 satellite captured this image of Mount Mabu on November 8, 2001. The deep green rainforest on Mount Mabu contrasts sharply with the surrounding land, where a patchwork of crops predominates. Croplands appear in varying shades of pale green, tan, and beige. Pockets of deep green are scatted throughout the developed area; these isolated remnants hint at the previous extent of the forest. Some of the cleared lands have a purplish color that could result from burning. Northwest of the mountain, a few puffs of blue-tinged smoke are visible.

Scientists at Kew concluded that a robust local economy, while good for human residents, threatened to degrade the forest of Mount Mabu through logging or agricultural burning. A series of expeditions to the rainforest uncovered pygmy chameleons, rare species of butterflies, a new snake species, three bird species not previously seen in the region, and a wealth of plant life, including rare orchids. Shortly after discovering the area, the Kew scientists began working with the government of Mozambique to protect the area.