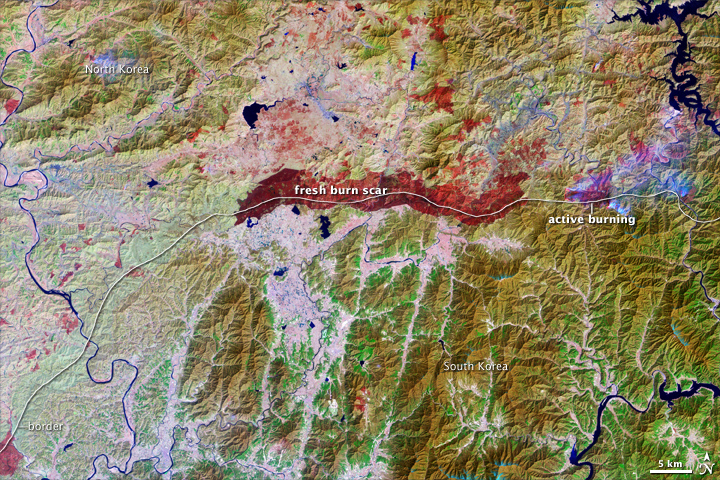 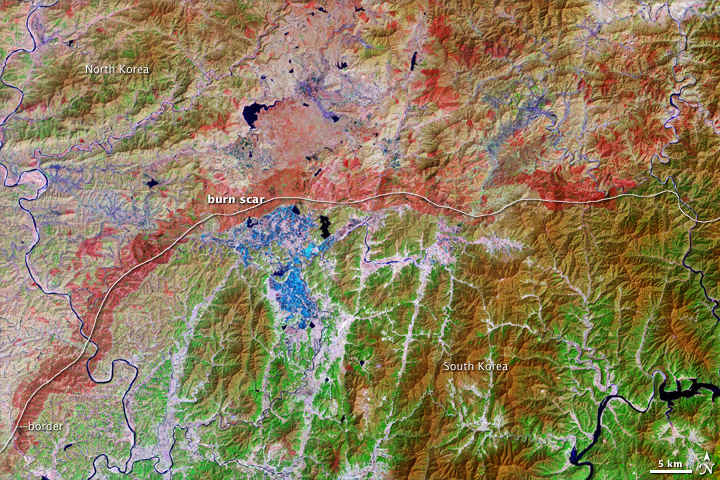 In 1953, the United Nations established the Korean Demilitarized Zone (DMZ) separating the Republic of Korea in the south and the Democratic People’s Republic of Korea in the north. Besides providing a political buffer, the DMZ evolved into an opportunity to protect an environment that experienced little human impact. Satellite imagery, however, reveals multiple burn scars of varying ages. The burning, according to a report from the United Nations Environment Programme, is probably related to military surveillance operations in both countries. The fires continued in 2003 despite an agreement that the two countries made in 2001 to halt burning activities.

The Enhanced Thematic Mapper Plus sensor on NASA’s Landsat 7 satellite captured these images of the DMZ on April 6, 2003 (top), and April 29, 2000 (bottom). These false-color images are made from a combination of visible light and light human eyes can’t see. This combination of light gives special prominence to burn scars. In the image acquired in 2000, a pink scar runs most of the length of the border. The relatively light color of this scar indicates that it is somewhat new but not fresh. In contrast, the image acquired in 2003 shows a deep pinkish-brown scar along part of the border. West of this scar, pale green vegetation suggests the area has recovered somewhat from previous burns. East of this scar, however, an active fire burns, releasing blue smoke.

Water is blue in this type of image. Several rivers and lakes appear in the scene. South of the border (just left of center) appears a blue-tinted area, and it appears brighter blue in the image acquired in 2000. This area is likely devoted to agriculture, and could consist of rice paddies, which would have been flooded.