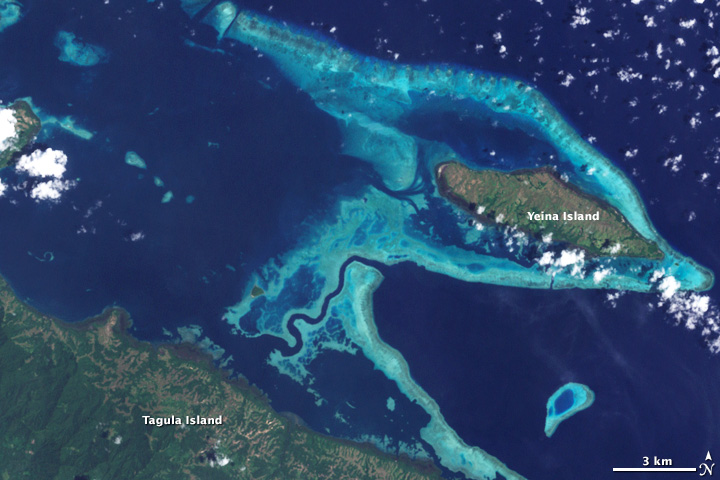 Scattered like turquoise and emeralds across the dark blue waters of the Coral and Solomon Seas, the coral reefs and forested islands of the Louisiade Archipelago stretch southeastward from the tip of Papua New Guinea for over 350 kilometers. This image of the area was captured by NASA’s Landsat 7 satellite on January 13, 2002.

The lower corner of the scene shows part of the northwestern coast of the largest island in the archipelago, Tagula Island. Most of the island is densely covered in lowland rainforest, but clearing for agricultural land is widespread around the perimeter, especially in the northwest. The shallow waters covering an extensive network of reefs are electric blue. A sinuous channel of deep, clear water (image center) connects a partially enclosed lagoon north of Tagula Island with the bay south of Yeina Island.

The Louisiade Archipelago has reefs and islands that are in various stages of “evolution” from fringing reef to coral atolls. Reefs start out as fringing reefs, growing in the shallow waters just offshore of a tropical island. As the island erodes or sinks, a lagoon opens between the reef and the island, and the reef becomes a barrier reef. Ultimately, the island may erode or sink completely below the water surface, leaving only a circle of coral surrounding a central lagoon—an atoll.