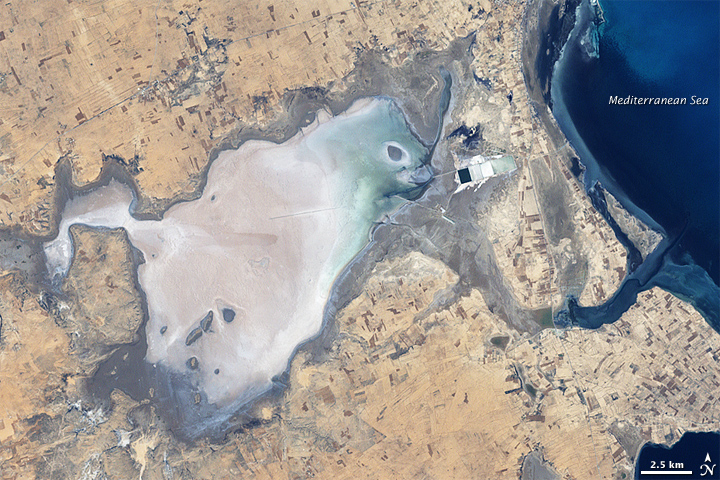 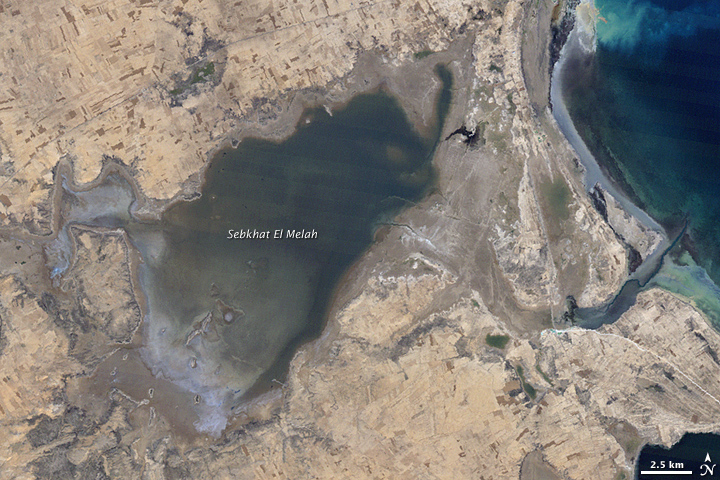 Along Tunisia’s southeastern coast is a flat plain of about 150 square kilometers (58 square miles) that lies below sea level. Known as Sebkhat El Melah (or Sebkha El Melah), it is in an evaporite basin. Occasionally, seawater infiltrates the coastal basin, carrying dissolved minerals that are later left behind when the water evaporates.

NASA’s Landsat 7 satellite captured the top image of Sebkhat El Melah on December 13, 1999. Almost 13 years earlier, Landsat 5 captured an image of the same area on January 2, 1987. In these true-color, photo-like images, the most obvious difference between early 1987 and late 1999 is the dramatic lightening of the basin’s color. Dark water fills the basin in the earlier image. In the later image, the basin appears largely dry, with remnant moisture tingeing the basin’s edges turquoise. Evidence of human activity also appears in the 1999 image. Rectangular shapes at the eastern edge of the basin are likely part of a salt mining operation in the area.

Over the years, people have drilled numerous boreholes into the Sebkhat El Melah to acquire potash, which is used to make soap, fertilizer, and even glass. These same boreholes have provided insights into the geologic history of the area. Although scientists are still debating the findings, the borehole data suggest that in the past, this basin held a perennial lake where minerals, including carbonate, gypsum, and halite were deposited.