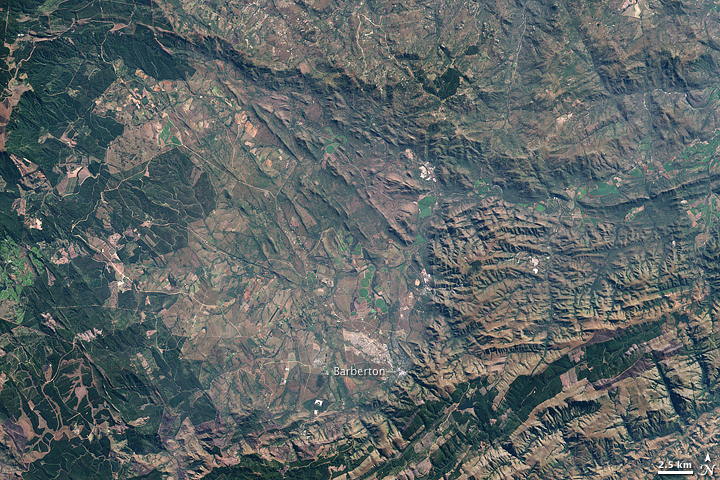 The mountains around the town of Barberton, South Africa, are rich in both history and prehistory. Referred to as the Barberton Greenstone, these mountains derive their name from their greenish hue, and they comprise what may be the world’s best-known greenstone belt. As far back as the 1880s, prospectors were attracted by the region’s gold deposits. Later examinations of the area revealed that the rocks date back some 3.5 billion years.

The Enhanced Thematic Mapper Plus sensor on NASA’s Landsat 7 satellite acquired this natural-color image of the Barberton Mountains on May 30, 2001. The bare rocks of mountain peaks appear as a pale gray-green, accentuated by the sharp relief of sunlit slopes and their shadows. Deeper shades of green indicate vegetation, including some vegetation on the lower slopes. In the mountain valleys, bright green areas suggest well-watered grassy areas and crops. Deeper green areas are probably forests. The series of bright green circles north of the town of Barberton result from center-pivot irrigation systems. The area north and west of Barberton appears slightly pale and fuzzy compared to the rest of this image, probably the result of low-lying haze. Haze also appears in the northeast and southeast.