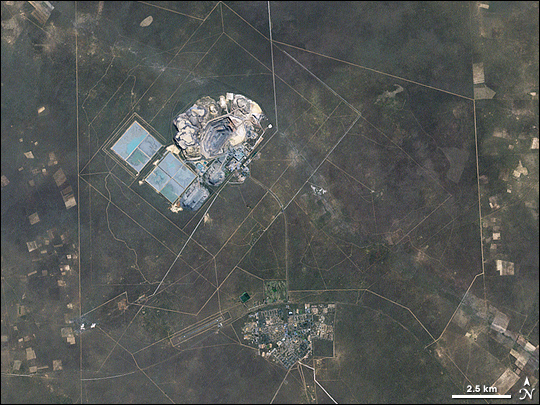 Botswana ranks first among the world’s gem-quality diamond producers, and diamond mining makes up 70 percent of the nation’s export revenue. The Jwaneng Diamond Mine, in south-central Botswana, sits atop the convergence of three kimberlite pipesâ€”diamond-rich geologic formations. Because the pipes meet just below the surface and cover some 520,000 square meters (128.5 acres) at ground level, the diamonds are mined from an open pit rather than a mine tunneled below the surface.

The Enhanced Thematic Mapper Plus (ETM+) instrument on NASA’s Landsat 7 satellite acquired this image of the Jwaneng Diamond Mine on May 17, 2001. The arid, flat landscape that fills most of this image appears in varying shades of brown, crisscrossed by pale beige roads. The Jwaneng Diamond Mine appears in the upper left quadrant of the picture, and a residential area appears near the bottom center.

At the center of the diamond mine, a series of concentric circles cut deeper and deeper into the ground. Surrounding the pit is a network of roads and structures related to the mining operation. Measured by the value of the diamonds recovered, the Jwaneng Diamond Mine is the world’s richest, but the mine also produces 9.3 million metric tons of oreâ€”diamond-bearing rockâ€”and 37 million metric tons of waste rock every year. As open-pit mining operations carve farther below the ground surface, they often encounter water tables, and the sky-blue color at the center of the pit could result from water. Southwest of the mine, two large rectangular areas also appear to hold some water. These areas might be used to let fine sediment settle out of a watery solution.

The settlement southeast of the mine contrasts with the arid landscape as much as the mine does. Here, tiny dots of green hint at trees and grassy parks. The pale beige rectangles around the perimeter of this image are probably crops or fallow fields.