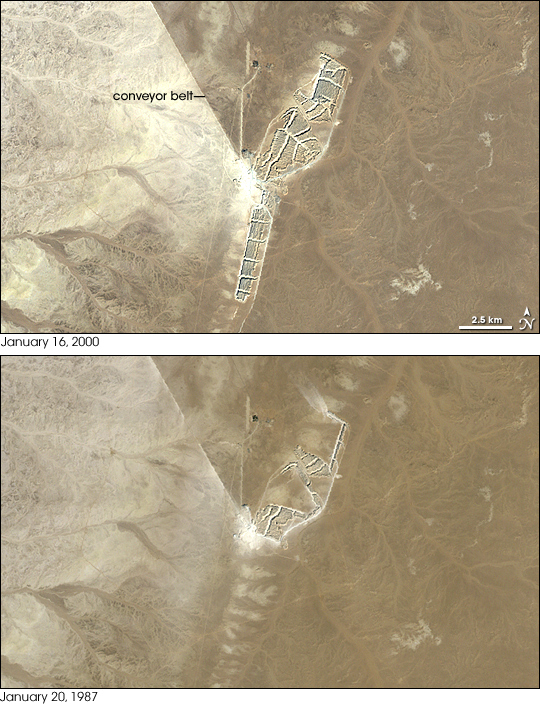 Rain is so rare in Western Sahara that crops occupy less than one half of one percent of this hyper-arid country’s land area, and citizens must import most of their food. Phosphate deposits are one of Western Sahara’s few natural resources. At the Bou Craa phosphate mine, 100 kilometers (about 60 miles) from the coastal city of El Aaiún, abundant, pure phosphate deposits lie near the surface.

These true-color satellite images show the expansion of the Bou Craa mine toward the end of the twentieth century. Landsat 7’s Enhanced Thematic Mapper Plus (ETM+) instrument acquired the top image on January 16, 2000. Landsat 5’s Thematic Mapper (TM) instrument acquired the bottom image on January 20, 1987. Mining operations grew primarily at the southern end of the mine, with a network of rectangles showing where rock had been overturned. By 2000, mining operations covered more than 1,225 hectares (roughly 3,000 acres). In 2001, this mine produced some 1.5 million metric tons of phosphate.

In both images, a conspicuous straight line runs from the center of the mining operations toward the northwest. This is a conveyor belt that connects Bou Craa with El Aaiún, and it can carry 2,000 metric tons of rock per hour. As of 2008, this conveyor belt system was the world’s longest.

Phosphorous is critical to the survival of plants and animals. In the human body, phosphorus helps to shape DNA and strengthen teeth, among many other functions. In agriculture, phosphorus acts as fertilizer to improve crop yield. Because phosphorus cannot be artificially produced, it must be mined from phosphorus-rich compounds, or phosphates. Although this region’s phosphate resources were discovered in 1947, phosphate mining did not start until the 1960s. The Bou Craa mining operation began growing steadily in 1974.