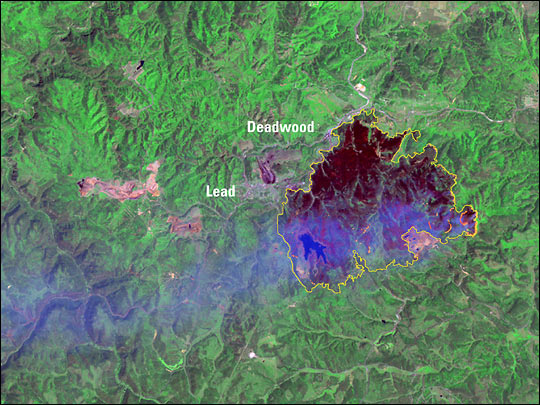 Burning next door to the South Dakota towns of Deadwood and Lead, the Grizzly Gulch fire forced the evacuation of many residents in the first week of July, 2002. In addition, smoke closed many of the roads in the area. At the time the fire’s behavior was extreme, with “torching, spotting, and running.” In other words, the fire was primarily burning along the ground, with entire trees occasionally erupting into flame (torching). At the same time, burning embers were being thrown ahead of the fire (spotting). In some areas the fire was spreading from the crown of one tree to another (running). (This glossary of fire terms has a good list of definitions)

The above image shows the fire on the morning of July 1, 2002. Actively burning areas, concentrated on the east (right) side of the fire, are colored red and orange. Dark red areas indicate burn scars, while forest and other vegetation appears green. The exposed rock of the Homestake gold mine, now the National Underground Science Laboratory, is pinkish-brown. The total extent of the fire is oulined in yellow. The image was acquired by the Enhanced Thematic Mapper plus (ETM+) aboard the Landsat 7 satellite.

More news about current wildfires in the United States is available from the National Fire Information Center.