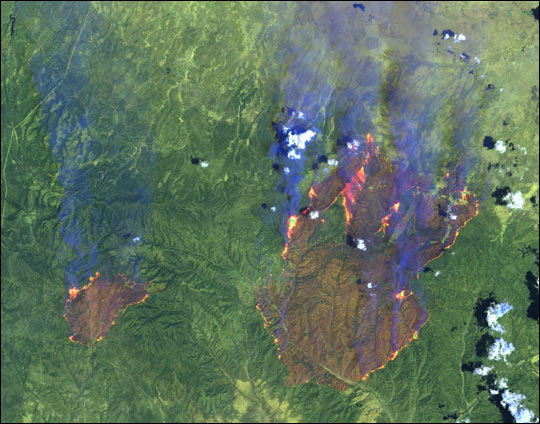 On June 21, 2002, the Rodeo and Chediski Fires in east-central Arizona were still two separate fires. This false-color (shortwave infrared, near infrared, and green as red, green, and blue, respectively) scene from the Enhanced Thematic Mapper Plus (ETM+) aboard the Landsat 7 satellite shows the active perimeter of the fires in yellow and vegetation in green. Burned areas appear pinkish-green, and smoke is blue. In this image, the smaller Chediski Fire is on the left, and the Rodeo Fire is on the right. At least one of the fires was caused by an arsonist.

The fires, which were burning about 100 miles east-northeast of Phoenix, merged over the June 22 weekend. By then, the blaze covered an area of over 410,000 acres and was threatening to consume the town of Show Low, Arizona. Thousands of people have been evacuated from the area, and over 6,000 firefighters from a number of state and national agencies were battling the fire. On June 27, the firefighters received a bit of a respite after cooler temperatures and light rainfall last night dampened the fire a bit. They had 5 percent of the fires’ perimeter contained—mostly near the town of Show Low. The firefighters were, however, a long way off from getting the entire blaze under control.