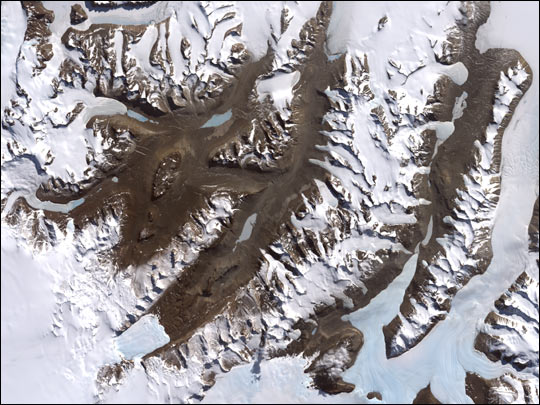 One of the few areas of Antarctica not covered by thousands of meters of ice, the McMurdo Dry Valleys stand out in this satellite image. For a few weeks each summer temperatures are warm enough to melt glacial ice, creating streams that feed freshwater lakes that lie at the bottom of the valleys. Beneath a cap of ice these lakes remains unfrozen year-round, supporting colonies of bacteria and phytoplankton. Over the past 14 years, however, summers have been colder than usual, and the lakes are becoming more and more frozen. If the trend continues, the biological communities they support may go into hibernation.

Most of Antarctica has cooled along with the Dry Valleys, in contrast to much of the rest of the Earth, which has warmed over the past 100 years. No one knows if the trend is related to global climate, or just a quirk in the weather.

This image was acquired by Landsat 7’s Enhanced Thematic Mapper plus (ETM+) instrument on December 18, 1999.

Image by Robert Simmon, based on data provided by the NASA GSFC Oceans and Ice Branch and the Landsat 7 Science Team