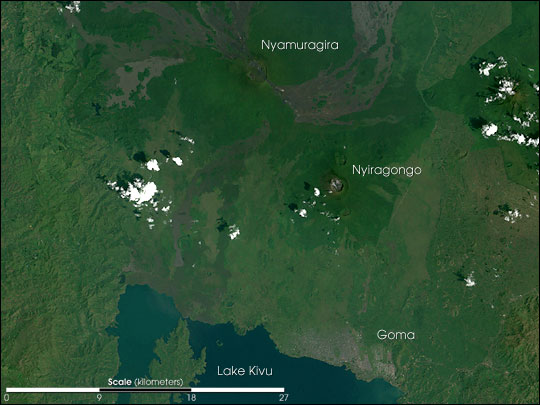 Nyiragongo Volcano before the Eruption

Nyiragongo is an active stratovolcano situated on the Eastern African Rift; it is part of Africa’s Virunga Volcanic Chain. In a massive eruption that occurred on January 17, 2002, Nyiragongo sent a vast plume of smoke and ash skyward, and three swifly-moving rivers of lava streaming down its western and eastern flanks. Previous lava flows from Nyiragongo have been observed moving at speeds of up to 40 miles per hour (60 kph). The lava flows from the January 17 eruption destroyed more than 14 villages in the surrounding countryside, forcing tens of thousands to flee into the neighboring country of Rwanda.

Within one day the lava ran to the city of Goma, situated on the northern shore of Lake Kivu about 12 miles (19 km) south of Nyiragongo. The lava cut a 200 foot (60 meter) wide swath right through Goma, setting off many fires, as it ran into Lake Kivu. Goma, the most heavily populated city in eastern Democratic Republic of Congo, is home to about 400,000 people. Most of these citizens were forced to flee, while many have begun to return to their homes only to find their homes destroyed.

This true-color scene was captured by the Enhanced Thematic Mapper Plus (ETM+), flying aboard the Landsat 7 satellite, on December 11, 2001, just over a month before the most recent eruption. Nyiragongo’s large crater is clearly visible in the image. As recently as June 1994, there was a large lava lake in the volcano’s crater which had since solidified. The larger Nyamuragira Volcano is located roughly 13 miles (21 km) to the north of Nyiragongo. Nyamuragira last erupted in February and March 2001. That eruption was also marked by columns of erupted ash and long fluid lava flows, some of which are apparent in the image as dark greyish swaths radiating away from Nyamuragira. Both peaks are also notorious for releasing large amounts of sulfur dioxide, which presents another health hazard to people and animals living in close proximity.

Image by Robert Simmon, based on data supplied by the NASA GSFC Landsat 7 Science Team